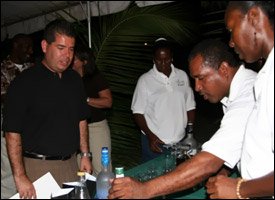 A top tourism official on Nevis issued a call to Nevisians to participate in the fourth Nevis International Culinary Heritage Exposition (NICHE). The event hosted by the Nevis Tourism Authority (NTA), is slated for October 17 to 19. It will feature cooking demonstrations and gourmet meals by international and Caribbean chefs with Caribbean produce; wine, cheese and rum tastings and a beach party.

Chief Executive Officer of the NTA Mrs. Gracia Thompson-Hendrickson told the Department of Information on October 13, that contrary to belief, NICHE was an event for everyone on the island, locals and visitors alike.

“It should be seen as an out of season event aimed at providing an opportunity for persons to take a break from the kitchen, going out, mingling and having a great time, enjoying the finest of local, regional and international cuisine,” she said.

For those persons who cannot afford to attend the events, Mrs. Thompson-Hendrickson suggested that they should visit the Old Manor Hotel on Sunday October 19, where Team SKB/NEV will demonstrate and prepare a sumptuous three course meal.

The CEO also reminded that the Authority had done much planning and had given a lot of effort in preparation for NICHE. However, the event’s success depended largely on local support and assistance.