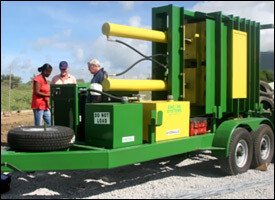 Discarded tires on Nevis will soon be put to use thanks to a new Encore Systems Tirebaler at the Long Point Landfill. The US60, 000 piece of new equipment sponsored by the Canada Fund and the Nevis Island Administration (NIA) was commissioned on Friday November 21, by Minister of Health Hon. Hensley Daniel.

The tirebaler was accessed through a collaborative partnership conceived by the Nevis Solid Waste Management Authority with the assistance of the Nevis Historical and Conservation Society who contacted the Canada Fund. The Four Seasons Resorts Estates provided transportation and paid the freight from Miami to Nevis.

Minister Daniel referred to the partnership as a move embraced by the NIA, who had endeavoured to marry its resources with that of the community, the corporate community and civic organizations to develop the island.

He said ultimately, all who lived on Nevis should have a solid interest to ensure that the island was esthetically appealing particularly as tourism was a mainstay of the island’s economy.

“When we market the country we don’t just sell a villa, we sell environment. In selling the environment we need to know that we are selling a safe and secure environment which is healthy.

“So if we are going to continue to make the island attractive to visitors and high end visitors in particular we have to promote this kind of partnership,” he said.

The Minister said it was important to bear in mind that the tirebaler came at a time when there was an increase in the number of vehicles on Nevis and the incidence of abandoned tires was up.

He explained that the new equipment which also had the ability to compress plastic and cardboard material would help to eradicate breeding grounds for mosquitoes and also provide the opportunity for the Authority to engage others who were involved in recycling and as such extend the life of the landfill.

Manager of the Authority Ms. Carlyn Lawrence indicated that the need for a tire baler was realized in 2007 but there had been many setbacks. However, the Authority had planned to use the baled tires on local soil erosion projects and also to divert the waste for recycling.

Not withstanding, she described as another excellent benefit, the elimination of a mosquito habitat for breeding because baled tires could not catch water.

Ms. Lawrence thanked all those who made it possible for making the tire baler available to the Authority.