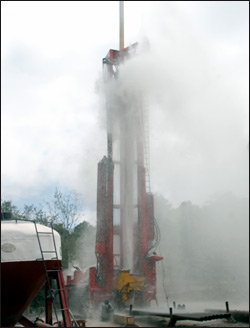 The water quality from the recently commissioned water well at Maddens has been described as excellent and of the same rating given to the older wells in the area and Butlers. However, water explorations in the south of the island, is expected to yield an improved quality over what exists in that area at present.

Word of this development came from Mr. Brian Kennedy Water Development Engineer at the Nevis Water Department (NWD) in the Nevis Island Administration (NIA) during an interview with the Department of information on June 30, 2008.

“The quality is excellent but in fact it is the same quality of water as in the existing Maddens and Butlers wells. Obviously it is in the same aquifer that same underground system, although Bedrock Explorations and drilling has managed to tap into a more direct free flowing part of the aquifer”¦ However, we look forward to much improved quality over on the south side [of Nevis] because the Maddens/Butlers water has always been the best on the island.

“The chemical analysis shows that the water over on the south side that’s from the Padlock we have three wells 1, 2 and 3, from Zion and Hickmans wells. That water is much worse than any of the other water, so we are hopeful that the next well that is being drilled at Fothergills will be good quality. The indications are that it is and therefore, you will see a much more dramatic change in the quality when we start bringing the one in the south on stream than the one we are bringing on now,” he said.

The Water Development Engineer explained that the next step would be pump testing for the well at Fothergills and indications were that the quantity could equate that of the Maddens well.

“The next step is it has to be pump tested. It is already drilled and the indications are that the preliminary tests show that we could expect the same sort of quantity of water  there as at Maddens but you can’t be 100 percent sure until you do a pump test  so that’s going to be arranged in the coming days. The electricity Department is putting the electricity up to the site and then the pump test will be carried out.

“I think we already know the quality will be good but as far as the quantity is concerned we will have the answers next week,” he said.

With regard to NWD’s capacity to service consumers in the future, Mr. Kennedy noted that the prospects looked good and at present the demand for water was 1.5million gallons of water per day.

Water explorations for additional water on Nevis commenced in late October 2007 on the first drill site in Hamilton Estate. Prior to drilling, ground water drilling explorations were carried out through out the island which included mapping through the use of satellite imagery, underground surveys and geophysical surveys to identify the target drill sites.

Under the Bedrock Exploration and Development Technologies (BEAD) contract with the Nevis Island Administration (NIA), the company was expected to develop one million gallons of ground water per day to compliment the current supply now available to the island.