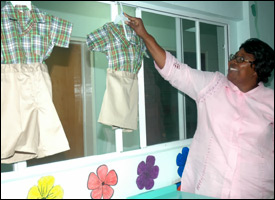 The opening of the new Challengers/Stonefort Day Care Centre brings to brings to 14, the number of Government-operated Early Childhood centres in St. Kitts and to 17 in the twin-island Federation.

This was disclosed Tuesday by Co-ordinator of Early Childhood Education, Mrs. Vanta Walters.

There are close to 60 privately-operated pre-school, day care and nursery in St. Kitts and Nevis.

Mrs. Walters said the new Challengers/Stonefort Day Care Centre, which is on the ground floor of the Multi-Purpose Centre will accommodate a total of 70 children between the ages of 3 months to five years.

“As you tour the Day Care Centre you will notice that there is a kitchen and a pantry to facilitate the preparation of three meals per day to be served to the children, but there is also a kitchenette specifically for the preparation of the infant’s meals.  There are toilets and bathroom facilities for both children and staff and a laundry, and a sleep room for the children to have a two hour nap daily. In addition there is also a supervisor’s office and a waiting room. The entire Day Care Centre is also fully air conditioned,” she said. This Centre is the first in the Federation to be air-conditioned.

She invited the guests, especially residents of the Challengers and Stonefort communities, who will be using the facility, to view the uniform on display and which will be used by the children of the centre.

“They can be purchased from Unique Fashions at College Street Ghaut. Notice also the Daily Routine that’s mounted, giving you an idea of how the children will spend their days here,” said the Early Childhood Coordinator.

Mrs. Walters used the opportunity to introduce to the parents present, the 14 members of staff in whose hands are entrusted the care of the children of the Challengers/Stonefort community.

The Day Care Centre is under the Supervision of Joyce Proctor. “The teachers at the preschool are Alechia Herbert, Charmaine Pyke and Sheila Marsham. The Nursery workers are Rosita Rawlins, Avonis Jones, Bernadette Sullivan, Janice Hendrickson and Cheron Percival. The cooks are Marlene Crosse and Susan Murray; cleaners, Adelaide Harris and Caroline Clarke and the Laundry Worker is Maureen Newton.