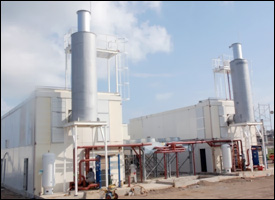 Two Of The Four Holeby Generators
Photo By Erasmus Williams

The two Holeby generating sets that were off-loaded at the Deep Water Port just over a week ago have been mounted on the platforms at the Needsmust Power Station annex in preparation for installation.

The two generating sets new were mounted on the platform next to two other sets that arrived here in August and are expected to be commissioned by the end of this month as part of the Electricity Department improvement programme to provide a stable, reliable and efficient service to consumers.

Permanent Secretary in the Ministry of Public Utilities said the first two generators that arrived in August were purchased at a cost of US$10,828,000 and the two that just over a week ago were bought at a cost of US$11,031,000. He said the total cost of the four gensets is US$22,031,000.

The compressors, the MCC (Motor Control Center) panels and the generator control panels have also been installed.

Engineers are on site to commission all the electrical components, the Heavy Fuel Oil (HFO) and diesel modules and centrifuges.

The two generators that arrived over a week ago are expected to be commissioned by February next year. The four gensets were purchased at a cost of US$22 million.

In 2008, the largest engine at the Needsmust Power Plant, a 7.6 MW set, was damaged by fire and two Caterpillars sets purchased between 1989 and 1995 had to be removed from service due to their long history of failures and problems, poor fuel efficiency and extreme unreliability.

Between 2007 and 2011 the Ministry of Public Utilities would have procured a total of seven (7) 4.0MW Holeby engines costing approximately US$38.2 million.