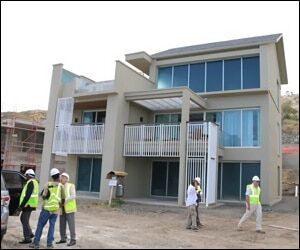 The management of the soon to be completed Park Hyatt, an ultra-luxury 5 star resort located at the South-east Peninsula in St. Kitts, is promising the Government and people of St. Kitts and Nevis that it will take its corporate social responsibility seriously in partnering with the community to provide jobs, training and scholarships among other opportunities that will grow the economy.

Range Developments is developing Park Hyatt St. Kitts. Mohammed Asaria, Vice Chairman of Range Developments, said work is moving rapidly on the resort to have it completed at latest by August of this year.

“The Park Hyatt will be one of the most spectacular hotels in the Caribbean once completed,” said Mr. Asaria, while noting that the resort has already been awarded with many awards for its design and has received accolades for being the fifth most anticipated hotel globally this year.

Mr. Asaria also told media representatives on the tour that the 126 room and suite hotel is being built to the highest international standards and will provide Hyatt’s highest level of hospitality experience, catering to a high end luxury individual.

“There’s a tremendous number of local Kittitians and Nevisians working on the site at present and we look forward to increasing that number over the coming months as we are on our final approach and people are recruited for hotel operations,” he said, while adding that they will look into the local market first in recruiting jobs.

“Our arms are open. Please embrace us. We’re looking for a partnership. This hotel isn’t just about the building, it’s about the soul of the hotel and what it does for the wider economy of St. Kitts and Nevis. We want an integral part and we want the people of St. Kitts and Nevis to become an integral part of the hotel. With that symbiotic relationship, this resort becomes a success, not just on opening, but for generations and generations to come,” Mr. Asaria said. “Let’s build on that partnership for the future.”

Julian Moore, General Manager of Park Hyatt St. Kitts, said that not only will the hotel provide job opportunities to locals but that it will “help in terms of standards, in terms of guidance and in terms of learning what things are needed to grow the country’s tourism product.

“We’re very proud and honoured to become one of the partners in the growth of St. Kitts and Nevis. It is a real privilege for us as a company,” Mr. Moore said, while reiterating their desire to work along with the community.

Kamal Shehada, Development Director of Range Developments, underscored the point that the leadership of Park Hyatt decided to build on the South-east peninsula to help with its development by creating small businesses around. He said that Park Hyatt takes its social responsibility seriously and will be partnering with the Government to help with education at the School of Hospitality to enhance the tourism sector. According to him, this will mean more training and scholarships and more exposure to the 5 star quality. He also said that Park Hyatt will partner with the Government in the agricultural and fishing sectors.

Prime Minister Harris said that the Park Hyatt “has been a very important project and development in St. Kitts and Nevis and it has all good news for the future.”

“We are delighted by the fact that such a significant brand as the Park Hyatt would come and be part of the socioeconomic development for St. Kitts and Nevis,” Dr. Harris said, while highlighting that he was “delighted by the fact that hundreds of persons have found work in the construction phase and we are even more pleased that there will be permanent jobs on the opening of this facility for some 300 persons.”

The prime minister emphasized to the leadership of Park Hyatt St. Kitts that “every effort must be made to ensure that the people and residents of St. Kitts and Nevis benefit in substantial ways” and that Park Hyatt St. Kitts embrace its corporate social responsibility that has been expressed time and time again.

Prime Minister Harris said that the completed Park Hyatt St. Kitts will be a genuine reflection of the talents and skills of our people.