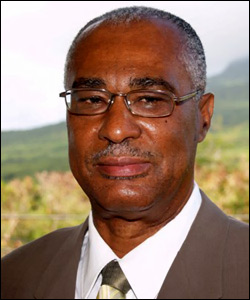 Premier of Nevis, Hon. Joseph Parry reported on a number of changes in the school system for the upcoming school year which will begin on Monday, Sept.1st, 2008. He made the report in an address to the nation on Friday, August 29th, 2008.

According to the Premier, Mr. Wakely Daniel of the Ivor Walters school and Mr. Carl Williams, headmaster of St. John’s primary, have been transferred to the Civil Service and will be replaced by Mrs. Ilena Mills who will move to the Ivor Walters Primary and Mrs. Adina Taylor who will head the St. John’s Primary School.

The Sixth Form College will also see a change, as Mrs. Marjorie Brandy will take over the leadership of that institution.

“The Ministry of Education has worked very hard to place the education system on a secure footing for the commencement of the new term,’ said Premier Parry.  He noted that several untrained teachers will be attending the Clarence Fritzroy Bryant College and that others have seized the opportunity offered by the Nevis Island Administration (NIA) to pursue Degree studies abroad.

The exercise commenced shortly after the administration took office and now Premier Parry says they are well on their way to provide the type of programme to make teaching attractive.

“I must conclude that education is not a matter of merely being able to read and write. It is a process to prepare each and every citizen for life and living,’ he said. ‘We therefore link education and training. We believe that every person who is touched by the programme of this government will be less inclined to pursue a life of crime,’ the Premier continued.  He stressed that the NIA believes that no child should leave school with any feeling of neglect, resentment or negativity against the school, the teachers or the system. ‘It is our job to ensure every child can read in the primary school system,” articulated Premier Parry.

This year the Education Department will have a special programme for children at Grade 3 who have difficulty in reading.

On concluding his presentation, Premier Parry declared: “We (the NIA) believe that once you have the weapon of the ability to read you will learn.  I am looking to an even more fruitful 2008/2009 school year. We require hard work and dedication from all. Only through hard work and dedication and the cooperation of teachers and Government, can we make our people fortified with a good education to make Nevis strong!”