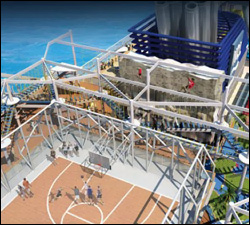 Norwegian Cruise Line revealed plans for a three-deck sports complex on the Norwegian Breakaway, which has St. Kitts – Nevis on its itinerary for the 2012/2013 cruise ship season.

The Norwegian Breakaway which is under construction at the Meyer Werft yard in Germany is slated to enter service in the spring 2013.

Details about the complex were unveiled during CLIA’s Cruise3sixty conference on April 27.

The ship’s sports area will have five water slides (including twin “Free Fall” slides), a zipline, a basketball court, a rock climbing wall, a ropes course and mini-golf.

The 4,000-passenger ship, which will be deployed year-round in New York, also will feature a Nickelodeon-themed water park.

“As a sports enthusiast, I am so excited about the extraordinary recreation and the over-the-top ways to play on this incredible new ship,” said Norwegian Cruise Line CEO Kevin Sheehan.

The Norwegian Getaway, sister ship to the Breakaway, will enter service in spring 2014 and be based year-round in Miami.

Norwegian Breakaway, which debuts in May 2013, will operate a series of 25 seven-night cruises to the Caribbean region starting on Oct. 13, 2013.