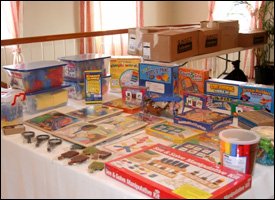 Kindergarten and Preschool teachers on Nevis are now better able to deal with the transition of their students from one level of education to another, with a gift of assorted learning materials funded by the Organisation of American States (OAS) on January 22.

However, the organisation’s representative for St. Kitts and Nevis Mr. Starret Greene, who was on hand to distribute the materials at the Red Cross conference room, challenged the Kindergarten teachers to make the best possible use of the training equipment.

“In the process ensure that the children develop a sense of responsibility in taking good care of them not only for their present use but for the future use of other children who will take their place after they have moved on to a higher grade,” he said.

The materials which were secured by Mr. Greene, through the Early Childhood Development Unit which were handed over on January would be used for the Preschool to Primary School Transition Programme.

He registered the Organisation’s satisfaction with the strides made so far in the transition programme which was also designed to provide training for the kindergarten teachers of St. Kitts and Nevis.

“Today the Federation of St. Kitts and Nevis has a group of trained kindergarten teachers who are now qualified to help our children make a smooth and effective transition at the outset of their primary education experience.

“The OAS is pleased with this outcome because it points to another successful investment that the organisation has made to further develop, modernise and strengthen education in the Federation,” he said.

Mr. Greene further explained that through the project, his organisation was assisting with the creation of an environment that would provide specialised support to the Federation’s children at a critical stage of their physical, social, cognitive and academic development.

He said the support for the technical cooperation activity, confirmed his organisation’s commitment to shape and mould young lives because there was every indication that these young children would ultimately emerge as the architects and builders of the twin island nation into the 21st century.

Principal Education Officer in the Ministry of Education Mrs. Jennifer Hodge who was also present at the ceremony welcomed the gift and stated that the transition of students between preschool and the kindergarten and of students from grade six to Form 1 was something she had long agonised about.

“We do not adequately prepare our students for this very critical phase and we are all educators so we very well know that research has revealed that students exposed to early childhood education are more likely to access tertiary level education. Hence, it is particularly pleasing to me to have this investment made at this level,” she said.

While Mrs. Hodge also acknowledged the support of the United Nations Children Fund (UNICEF) with teacher training, she said the Ministry and the Department of Education looked kindly on the donation and were deeply appreciative for the OAS donation.

Under ordinary circumstances she said the education authorities would have been unable to fund a project of that kind because of financial constraints and commended the OAS representative for his assistance.

“I have but the highest commendation for the OAS through the instrumentality of Mr. Starret Greene Director based in St. Kitts who certainly understands the need for manipulative and hands on materials to aid the learning of our children,” she said.