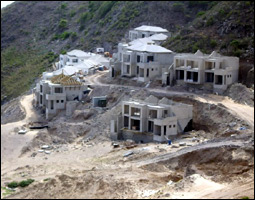 The start of construction of poolside residences at Ocean’s Edge by the Cable Bay Hotel Development Company is continued demonstration of confidence in the future of St. Kitts and Nevis and its people.

So says St. Kitts and Nevis Prime Minister Hon. Dr. Denzil Douglas during a ceremony to mark the start of construction of the first two blocks consisting of 20 units under Phase III.

The US$150 million project has already seen the construction of 30 – two-room hillside units and 16-one-bed hotel-style studio under phases I and II.

“I emphasize that projects such as this, represents dozens of jobs for our people and contribute millions of dollars of expenditure in our economy,” said Dr. Douglas, pointing out that the project that started 10 years ago has seen the completion of phases one and two.

“Fortunately the private and public sector interests have worked together to keep the project alive even at the most awkward moment. I recalled that I was here with you just a few years ago when we were able to break ground to start the revival of this project after bringing some new ideas and a new investor to the table,” said Dr. Douglas, adding that inspite of the understandably slow progress of the project since, “my government is very excited about the start of this Phase Three which when completed, is expected to the world class resort hotel as an important addition to our hotel sector.”

Prime Minister Douglas said that was a need for additional high quality hotel rooms that had enticed his government through the Ministry of Tourism and the Frigate Bay Development Corporation to get involve as an investor by providing the land on which this project is now standing.

“I believe I can say with confidence that this project only emerged from the ground a few years ago because of that unusually progressive shareholder relationship which have married both local and foreign private investors into a collaborative commercial arrangement with my government,” said Dr. Douglas.

He said the bold commercial decisions back then, are now bringing to fruition a very critical new phase of investment in the future growth and development of the Federation’s hotel sector in particular and the economy in general.

“We know that these are still challenging economic times for our region where similar tourism investments have mostly ground to a halt, most of which have been unable to get restarted at all. And so this ceremony today is an important indicator that the clouds of recession are in fact slowly but surely receding and that there is reason for renewed optimism,” said the Prime Minister.

He said with confidence being returned to the economy in general and with the recovery from this prolonged recession, the Third Phase will now see accelerated responses from the international marketplace.

Emphasising that tourism is a very resilient industry having evolve with every major challenge it has faced in the Federation’s history, Dr. Douglas declared “our responsibility as a caring government, as persistent private investors and as committed stakeholders in our tourism industry, is to ensure that we effectively adapt to the reality of existing market situations while creating and implementing new strategies to exploit areas of opportunities.”

“The success to date of this project is a classic representation of what can be achieved even in the most difficult of circumstances when private entrepreneurs push forward creatively along with the support and encouragement of a forward looking government,” said the Prime Minister.

He wished that the Ocean Edge Project will now achieve the construction momentum it deserves and looked forward to another important ceremony in two years when a new hotel is eventually opened in this part of St. Kitts.

“It is also my fervent hope that all those who are employed here will again achieve the highest standards of quality in this Phase of your construction and that the doors that you open to your hotel rooms in the future will represent the start of an exceptional destination experience for guests of Ocean’s Edge. We have to continue to achieve the highest Kittitian, Nevisian and Caribbean standards that are globally acceptable while at the same time maintaining and presenting authentic local culture supported by our natural Caribbean island heritage,” said Prime Minister Douglas.

He reiterated his government’s keen interest in continuing the good work with all stakeholders in the tourism industry “as we strive to sustain the advances made while seeking new avenues to support the future growth and development in this sector.”

Dr. Douglas commended and congratulated all of the share holders of the Cable Bay Hotel Development Company especially the local partners, National Bank, RAMS, TDC, the Frigate Bay Development Corporation and the Ministry of Tourism.

“We could not have done it without the foreign direct investment and the partnership that has been put in place as well and so we commend and congratulate all for your endeavours and success as you proceed in this new phase ““ phase three of this important development for our St. Kitts and Nevis,” said Prime Minister Douglas.