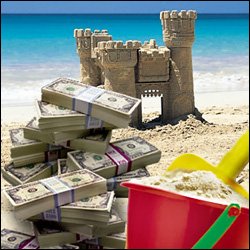 Ain’t Your Financial Life A Beach!

St. Kitts and Nevis said Wednesday that its efforts and that of the other OECS countries to meet international compliance of their financial services sector are like “working towards a moving target.”

According to the statement issued by the Office of the Prime Minister, following his Press Conference on Wednesday, this blacklisting by France of countries that they claim have failed to corporate on tax issues has caused tremendous concern for the Federation for  a number of reasons.

It said that the Federation had concluded negotiations and initialed agreements with 17 countries for tax information exchange agreements and double taxation agreements by the end of 2009 and was in a position to sign all of these agreements at that time.

“However, the Federation was told that we would have to wait until these OECD countries carried out their internal bureaucratic processes before we could be given a date or a venue for signature.  We were able to sign 8 of these agreements by the end of 2009 and we signed our 9th agreement with the UK in January of this year,” said the statement promised by St. Kitts and Nevis Prime Minister Hon. Denzil L. Douglas in response of France’s blacklisting of several Caribbean states.

It said it is extremely unfair for St. Kitts and Nevis “to now be penalized by France for not meeting the required standard of 12 signed tax agreements as we sit and wait for OECD member countries to inform us that they are ready to sign these agreements.”

It noted that the World Bank, in responding to a call by St. Kitts and Nevis and other OECS countries for assistance in getting agreements signed with OECD member countries in a more timely fashion, appointed a consultant to assist the OECS countries with this process.

“This consultant has actually negotiated with France the text of a Tax Information Exchange Agreement on behalf of the OECS countries which the Federation signed off on last month and we are now awaiting a date for signature of this agreement from the French Government.  It is therefore surprising that despite this development, France has seen it fit to move ahead of its other G20 counterparts to issue its own blacklist and to announce sanctions with effect from March 1st 2010 which are indeed quite punitive and will completely stagnate any investment by French nationals into the Federation and the OECS region.  It is of further concern that countries blacklisted by France, even if they meet the international standard one week later, will remain on this blacklist until January 1st 2011 when this list will again reviewed,” the statement noted.

“These rules are based on the OECD model Tax Information Exchange Agreement and are therefore in compliance with the international standard.  The reason for the Government taking this initiative was firstly to ensure that we would not be hindered by the cost and time involved in negotiating tax treaties to enable us to comply with our international obligations.  Our experience in being able to receive dates for the signing of our already negotiated agreements has demonstrated that this fear was in fact justified,” it said.

The OECD in a publication on its website dated April 21st 2009 entitled “Countering Offshore Tax Evasion” Some questions and Answers on the Project: clearly stated that the standard for transparency and tax information exchange can be implemented through bilateral tax treaties or Tax Information Exchange Agreements (TIEAs); by multilateral agreements.; or by domestic legislation allowing for the provision of information on a unilateral basis.

Government has been advised that the Global Forum, following an intervention made by St. Kitts at the September 2009 Global Forum in Mexico is now looking into the matter. However, this move to review this mechanism has obviously come a little too late for the Federation and many other OECS countries.

The Federation will be signing a tax information exchange agreement with 6 Nordic countries on March 24 2010 and will at the latest be removed from the OECD Grey List on that date.

“This being said, we will continue to do our part to advocate for the official recognition of the unilateral mechanism to ensure that in the event that the threshold is again changed in the future, that we will not be in the position we now find ourselves where we are at the mercy of the bureaucracy of OECD countries.  We will also continue with our attempts to being a final conclusion to the negotiations with the countries that we have already initialed tax agreements with and with other countries that we are currently negotiating with,” said the statement.

Countries the Federation has initialed or concluded negotiations with and are awaiting dates for signature are Australia, Canada, France, Germany, Norway, Sweden, Greenland, Faroe Islands, Iceland, Finland and San Marino.

Countries the Federation has commenced discussions with about Tax Information Exchange Agreement but have not yet confirmed the text for these agreements are India, Japan, Republic of Seychelles and the United States.