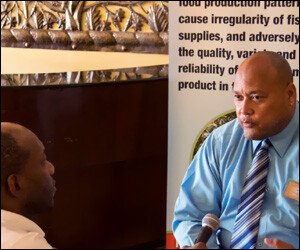 The realities of climate change, its current impact on the region, and ways to effectively share the message with the public were explored last week at a two-day symposium for private media and communication personnel within government.

The June 18-19 symposium was attended by approximately 50 persons from the Organization of Eastern Caribbean States (OECS) member countries. It was held at the St. Kitts – Nevis Marriott Resort and was organized by the OECS Commission as a first time initiative.

The RRACC project is funded by the United States Agency for International Development (USAID) to the tune of US $10.5 million. The workshop was hailed a success by Arnold, who highlighted the enthusiasm of and the interaction between participants. As for the message he stressed that given the current climate, everyone was on-board.

“Climate change is affecting all of us,” the OECS official emphasized. “I’m sure everybody is crying out now about the extended dry period we have had this year “¦ and in previous years.

This is a part of climate variability and also of climate change. We all know that temperatures globally are increasing. We are getting more severe storm events and things of that nature. We cannot be like ostriches and bury our heads in the sand and not pay attention to it.”

To reinforce the point Arnold mentioned the destruction caused by Hurricane Ivan which devastated a number of islands in 2004. Grenada suffered the most damage with an estimated cost of more than US $1 billion. In 2010, Hurricane Tomas racked up a bill close to US $600 million when it passed through the Windward islands. St. Lucia was severely impacted.

“There is a lot of buy-in from the policy makers,” Mr. Arnold noted, citing other recent weather related phenomenon, and the leadership role played by St. Lucia’s Minister of Sustainable Development Dr. Jimmy Fletcher.

The OECS is a grouping of nine small island countries in the Caribbean, and experts agree that small islands are more likely to be the worst affected from climate change.

“We have a big voice. Collectively we can stand our ground in the international arena and we can bring our points across and this is exactly what we’ve been doing in the last couple of years,” Arnold disclosed.

Caribbean leaders are expected to raise their voices on this topic at the 21st Session of the Conference of Parties to the United Nations Framework Convention on Climate Change (COP 21) to be held in Paris from November 30 to December 11.