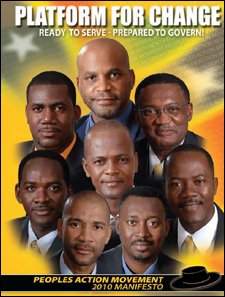 A PAM Platform For Change Poster

Following the official launch of the People’s Action Movement (PAM) 2010 Manifesto, Deputy Leader Hon. Shawn Richards compared the party’s agenda of change to the plans put forward by the Labour party and the only conclusion was “chalk and cheese”.

The party’s plan, launched with the theme Platform for Change was released January 19, at a massive meeting of supporters and well-wishers at Upper Market Street. Cover to cover of the 35-page document clearly illustrates the commitments of a PAM government to improve the lives of all in the Federation.

Richards, who is currently Shadow Minister for the Economy and Finance, heralded the 2010 manifesto as a recipe for visionary, achievable growth and development to advance the nation.

He said, “We have given a comprehensive plan and we have outlined policies to deal with the main issues affecting the majority of persons. It proposes to change the economic development of the country and to ease the burden borne by the people of this country.”

Richards criticized the Labour manifesto stating that it does not propose any initiatives to properly address the issues affecting the nation. The current issues of national concern include national security, cost of living, healthcare and house and land distributing policy and these issues have not been addressed in the Labour “picture book”.

“You would expect that any government that is serious about looking after the issues of the country would present a manifesto which would adequately address law and order. Instead, when you look at the manifesto, the issue of national security is buried in the middle of the document with more pictures and drawings than actual programmes and policies,” he said to a crowd of supporters.

Although the Labour’s picture book did not have any space to address the issues regarding national security, the 2010 Platform for Change outlines a number of measures to address the crime situation.

Under a PAM administration, the police force will be allowed to function free of political influence, the remuneration of police officers will be based on academic experience and performance, the working conditions of security personnel will be improved and pensions and compensations addressed. This would allow for the establishment of a modern forensic lab to seriously tackle crime which has been set on the backburner by the outgoing Labour government.

No new ideas, no creative initiatives and no vision could be seen in the area of cost of living. Despite the fact that cost of living and employment have been two of the major issues in this 2010 campaign, the Labour colour book did not state its plans in this area.

“The only thing they have in here is that they increased the minimum wage, saying that is not enough because when you are making the minimum wage, you still cannot afford to buy the basket of necessary goods and services, this means they have fallen short,” Richards said.

However, in the Platform for Change, consumers can expect to have full baskets of grocery because under a new PAM administration, all duties on food imports will be removed, the dreaded fuel surcharge will be abolished and the environmental tax on vehicles reviewed.

The party also pledges to readjust mortgages of NHC homes down by 25% to improve owner’s living standards and opportunities for home improvement.

After reading through the picture book thoroughly, Hon. Shawn Richards said he struggled to find policies on healthcare and land and housing distribution, but he assured the nation that a change in government will come with a universal health insurance programme.

Commencing within its first 100 days in office, a PAM government will sell government land to locals, in particular youth, at the price of $0.99 per square foot for all sizes of residential lots. This is certainly not just a page of colour, but a platform upon which change can be actualised.

To independent and undecided voters, Hon. Shawn Richards said, “Read the manifestos of both parties and see which party if offering a comprehensive programme which is in the interest of future generations of the country.”