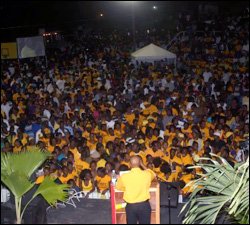 The People’s Action Movement has tightened security for its candidates and officials. This announcement was made by Leader of the Party, Lindsay Grant at a Press Conference he hosted with the media on Wednesday at OTI.

Grant said that after advice from the intelligence unit of the party they have sought to tighten security for its candidates and officials stressing that safety is of paramount importance. “We have sought to ensure that our candidates and officials are safe as we need to ensure that we can conclude this election campaign with everyone intact,” he said.

He noted that he has also been reliably informed that there is a plan to create confusing and instill fear into voters with the aim of intimidating PAM supporters at the election.

While not disclosing the various security measures in place he assured the media that as leader of the party he has sought to ensure that adequate security id in place.

Grant added that he is very confident of winning the elections pointing to the need for a number of changes to the way things are done in the federation.  He noted that the party and its candidates have been targets of the Labour Party over the years pointing to two incidences in which a candidate was seriously injured while the wife of another was assaulted.

Grant also noted that police protection should be given top priority by contesting candidates adding that it’s pivotal that the safety of a candidate is maintained.

He added that under his administration a number of new and innovative projects and programmes will be implemented.