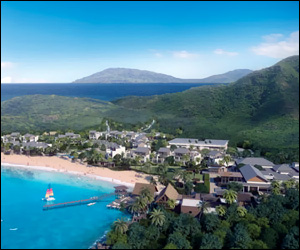 The Park Hyatt St. Kitts project, now under construction, is vital to the future economic growth of St. Kitts and Nevis.

So says Minister of Tourism and International Transport, Sen. the Hon. Richard “Ricky” Skerritt, who expressed confidence that the project has all the right elements of sustainability embedded in its design.

St. Kitts is consciously re-branding itself as a five-star destination, with luxury boutique properties. Since 2006, following the closure of the sugar industry, we made a strategic decision to shift our visitor demographic balance towards the higher end of the market. This has required improving the quality of our accommodation products, and this project is in line with that policy,” said Skerritt in an interview published in the Times of Oman under the caption “Ticket to a Caribbean Paradise ““ St. Kitts.”

The article written by David Black, promotes the Park Hyatt St. Kitts as a Citizenship by Investment Programme.

The project is to build a 5-starbeach resort at Banana Bay on the south side of St Kitts, to be operated by the Park Hyatt hotel group.

“An investment in our real estate project entitles the buyer to a share in a 5 star branded hotel that will deliver an annual income yield from the outset and deliver all the benefits associated with Citizenship of St. Kitts and Nevis to investors of good character,” said Mohammed Asaria, Vice Chairman of Range Developments.

The development has a cap of 400 individual investors to fund the project, with limited inventory remaining available.

The deal has been made possible by the Government of St. Kitts and Nevis’ Citizenship-by-Investment Programme that was established in 1984, and is the longest established programme of this kind in the world.

The peninsula will also support a super-yacht marina capable of handling up to 300 yachts, a Tom Fazio designed championship golf course and an exclusive beach club.

The Park Hyatt itself will boast a presidential villa, a number of restaurant areas including a ‘Fisherman’s Village’, and over 40 per cent of the accommodation will be configured as suites, well above the usual 18-20 per cent ratio for similar luxury resorts. The hotel will have 134 luxury rooms and related service facilities, built around a Caribbean village theme. The site includes a long stretch of picturesque golden sand beach and spectacular hillside views across to the nearby sister island of Nevis.

The main construction contractor on the project is Kier, the leading UK construction and property group which specializes in commercial property development. Kier has a track record of working in the Caribbean for over 50 years, and has constructed some of the most prestigious resorts in St. Lucia, Barbados, Antigua and Jamaica.

The project has been designed by architect Simeon Halstead, whose company Arcadia has worked on projects including the Park Hyatt Goa, the Shangri-La Phuket and the Hyatt Regency Sharm El Shiekh.

Range Developments’ Mr Asaria added: “Situated about 1,300 miles southeast of Miami, Florida, St. Kitts is about 60 miles from St. Barts, St. Maarten and Anguilla. It is an English-speaking country which became independent from the UK in 1983 but remains a member of the British Commonwealth, hence the acceptability of its passport.

“The islands, which cover about 65 square miles, have a population of about 50,000 with a 95 percent literacy rate. The GDP is US$550 million and the currency, the East Caribbean Dollar, maintains a fixed exchange rate of 2.7 to the US Dollar.””And the fact that St. Kitts enjoys a politically stable and democratic government, makes it an ideal place to invest.