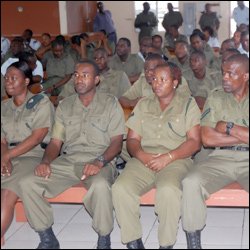 Prime Minister Hon. Dr. Denzil L. Douglas said Thursday that provisions have been made for soldiers of the St. Kitts-Nevis Defence Force to receive benefits under the New Pensions and Gratuity Regulations.

“These Regulations ensure that every one of you who have given at least ten years of service can qualify for your gratuity and also can receive a pension upon attaining the required years of service like the other members in the Security Forces in the Federation.  You can be assured that we have made provision for yourself and your dependents after you are gone. We have not only made provision for you in times of colour service but also during your retirement. I wish to reassure you that you have nothing to fear,” said Dr. Douglas.

Prime Minister Douglas, who is also Minister of National Security, said The Defence Force Board has ensured soldiers will be on par with their colleagues in St Kitts and Nevis and counterpart agencies in the region so that they receive their just reward.

“These benefits that are now part of your improved tenure of service are outlined in the document and will provide adequately for pension and gratuity at the end of your service,” Dr. Douglas said to the thunderous applause of the men and women in uniform.

He said officers and soldiers transferred from Public Service and Police Service to the Defence Force will have the benefit of their years as part of the qualifying years of service under these Regulations.

“Retirement at full rate of pension which is clearly laid out in the Regulations, benefits in instances of invalidity or death before and after the completion of the qualifying years of service, pension to widow or spouse and children of members of the Defence Force who die in the execution of their duty, special gratuity for officers dying before completion of ten years of service and payments of a pension to dependents even after the death of a retired soldier are among the many provisions of the Regulations,” said Prime Minister Douglas during the annual Christmas Luncheon.

He said the Defence Force soldiers will receive insurance benefits in addition to their pensions and gratuity payments.