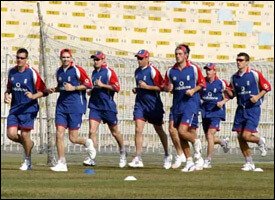 Members Of The English Cricket Team Warm Up

Cricket officials in St. Kitts and Nevis have begun to plan for the inaugural visit of the English cricket team, next year.

The team is set to compete against the West Indies squad in the 2009 Digicel Home Series, which officially begins in St. Kitts when the touring team touches down on January 21, at the R. L. Bradshaw International Airport.

Minister of State responsible for Sports, Honourable Richard Skerritt, told SKNIS that the visit of the English team is historic and he expressed pleasure with the excellent reputation the island continues to garner in international cricket circles.

Chairman of the Local Organising Committee and Event Director, Cuthbert “Panis” Manchester echoed the Minister’s comments and said that the anticipation is beginning to build.

“I think there is a lot of historical inertia to [playing the English team]. We were a British colony and there is a recognition of the presence of an English team,” he stated. “The fact that many people have not seen an English team here, I think is going to be significant in terms of generating the interest.”

The English squad will spend January 22 to 24 in the nets, sharpening their batting and bowling techniques.  Then on January 25 to 27 the tourists will take the field at the Warner Park cricket stadium as they square off against a St. Kitts and Nevis Invitational Team.

After a day of rest and perhaps some light practice on the 28th, the tourists will have their second and final match in St. Kitts against a West Indies A team. The three-day contest runs from January 29 to 31.

Mr. Manchester noted that the LOC, Government, and cricket associations from both St. Kitts and Nevis are collaborating closely to ensure the event runs smoothly. He stressed that his committee was strategically chosen and has already gotten down to the task at hand.

“We have quite an experienced LOC with a wide range of personal experiences and a wide background with respect to managing and implementing the plans for such an event,” the Chairman disclosed. “We are trying to get much of the preparatory work done as early as possible “¦ so that the Christmas [and Carnival celebrations] doesn’t impact severely on the planning. By the time we get to January, we will have things in place and we will only need to fine tune arrangements.”