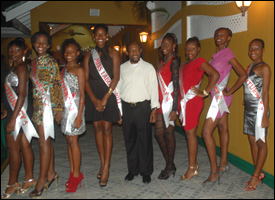 St. Kitts and Nevis Prime Minister the Right Hon. Dr. Denzil L. Douglas says his governing St. Kitts-Nevis Labour Party has been mostly responsible for the development of young people during its 80 years of existence.

“The St. Kitts-Nevis Labour Party is about the development of young people. We have been doing that for 80 years. It is through this Party that we have seen the development of gifted young people showing talent honed over the years and which will be on display on the evening of the Miss St. Kitts Queen Pageant on Saturday 5th May,” Prime Minister Douglas told the contestants, their chaperones, Ministers of Government and officers and executive members of the Labour Party Executive during a reception at Marshalls, Frigate Bay.

In raising a toast to the contestants Dr. Douglas noted that the Pageant is of historical importance as it is one that celebrates the 80th anniversary of the founding of the Labour Party as a political organisation.

“It is expected to be one of the greatest shows at Carnival City spiced with local and international artistes,” said Prime Minister Douglas.

The teens, who represent each of the eight constituencies in St. Kitts, will vie for the Miss Labour crown.