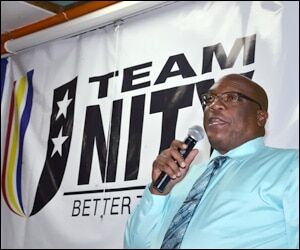 Prime Minister Dr. the Honourable Timothy Harris has praised the strength and support of the Women of Unity just a few days shy of the Government of National Unity’s first year anniversary since rocketing to power in the 2015 General Elections of February 16.

Dr. Harris went on to outline the achievements of his young tripartite government, some of which include the removal of the Value Added Tax (VAT) from food, medicine and funeral expenses, $16 million EC payout to disenfranchised former sugar workers, $25 million EC to Nevis in budgetary support and the ending of the shift system at the environmentally health plagued Basseterre High School (BHS) by building a temporary structure with plans of a new BHS in the near future.

He revealed plans by his government to improve the health system by reaching out and helping the mentally ill in constructing a mental health facility and the addition of an oncology center at the Joseph N. France Hospital. He also said that the Mary Charles Hospital in Molineux was under renovation so that it can deliver improved health care services to the people in its environs. He also said that the government will soon launch its housing programme.

Prime Minister Harris wrapped up his address by congratulating the Women of Unity for their strength and support and encouraged them to stay strong. He quoted from Psalm 133:1: “How good and pleasant it is when brothers and sisters dwell together in unity.”

He asked Team Unity’s supporters to be patient because “Rome was not built in a day” and said that many things had been accomplished in one year and many more things will be accomplished as his Government advances the agenda of the people because ultimately “the people will judge the government for keeping its promises.”

Prime Minister Harris listened to some of the concerns of the Women of Unity and promised to come to their aid.

Mrs. Kay Menon chaired the proceedings and was assisted by Gene Condor and Honourable Hazel Brandy. The Constituency 7 Choir contributed songs in praise and worship and Lady Diva entertained the audience with her song “So far, So good.”