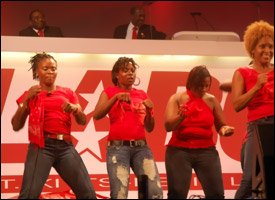 The importance of young people in helping to shape polices for the continued social, economic and political development of the twin-island Federation was given new emphasis on Friday.

In what has been recorded as one of the most inspiring moments the Federation has ever seen”¦”¦. 50 young Kittitian and Nevisian youths took to the stage in front of a cheering crowd of over 12,000 at the governing St. Kitts-Nevis Labour Party’s spectacular Super Rally at the Warner Park Cricket Stadium.

St. Kitts and Nevis Prime Minister Hon. Dr. Denzil L. Douglas, a champion for youth regardless of their political affiliation, in a fitting tribute to the Youth of the Federation, reiterated that young people “are this country’s most precious resource and the future rests in your hands.”

Launching RED: Ready Energetic and Devoted ““ the Labour youth initiative as part of the spectacular Super Rally, Dr. Douglas saluted the youth group who believes in the party’s vision for the Federation and its national policy of including the youth in its overall development.

On stage, the RED Team presented to the thousands, a vibrant song and dance routine which included the introduction of several youth representatives from the constituencies.

In recent weeks, the Labour Party has been promoting some dynamic new ways in which to involve youth within the political process.

“This is democracy as it should be. A country in touch with its youth and its future: embracing change and developing talent. The Labour Party website sknvotelabour.com is an example of this fresh thinking. The site includes a “˜Your Voice Counts’ section ““ which allows the youth of our country to talk to my cabinet directly. I ask every youth here tonight to take the time to tell us your ideas. We are listening. We want to hear your voice. We want to make St Kitts and Nevis even better for each and every one of you.

Any youth who visits the Labour website can enter their brilliant idea for the future of our country ““ and the Labour Party Cabinet pledges to read each and every suggestion. The very best ideas will help to shape the next Labour Government’s policy,” said Prime Minister Douglas.