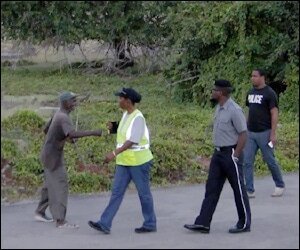 Police Interact With The Public

The increased support of law enforcement by residents of St. Kitts and Nevis has been hailed as a contributing factor in driving down crime in The Federation.

At a press conference on Tuesday (March 15) at Government Headquarters, Prime Minister and Minister of National Security, Dr. the Honourable Timothy Harris commended the public for what he described as “wide felt support of the new high command team and indeed for the police and law enforcement agencies in general.”

Commissioner of Police, Ian Queeley, stated that an increased presence of police officers on the streets and heightened tactical operations have resulted in successes. These include arrests for various offenses and the recovery of a number of illegal firearms.

“I ask the public to provide the police with any information which it has regarding criminals, [or] criminal activities be they from the past, the present or imminent,” Prime Minister Harris said. “The long arm of the law will protect you and the truth is the life which you may save may well be yours or a family or friend.”

Dr. Harris, who is also the minister of national security, pledged that his government will continue to do its part to upgrade police resources.

“We have provided operational support to the police in the form of vehicles, a special comparison microscope, a new forensic department and the expertise of the Bramshill Police Advisors,” he stated. “My government has said repeatedly and again that we will leave no stone unturned in our efforts to keep our country safe and secure.”