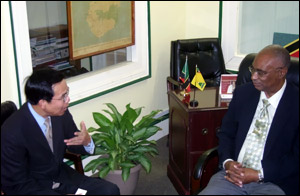 Premier of Nevis, the Hon. Joseph Parry welcomed the new Taiwanese ambassador to the Federation of St.Kitts and Nevis, Mr. Rong- Chuen Wu, as he paid a courtesy call to Nevis on Friday morning.

Premier Parry stated that he wishes to continue the development of strong relations between Taiwan and Nevis. “I look forward to discussing the needs of Nevis to the Government of Taiwan and for us to work together to develop the island to the satisfaction of Nevisians.”

Premier Parry interjected that the Nevis Reformation Party led Government has also sent a number of young people to Trinidad to develop their skills in plumbing, masonry, carpentry and other useful trades.

Meanwhile, it must be noted that Taiwan has assisted Nevis greatly in agriculture and the training of persons in various fields. “I wish to continue the supportive measures our country has performed to sustain agricultural techniques on the island of Nevis,” said Mr. Wu.

Finally, when asked about his impressions of the island, Mr. Wu expressed how pleased he was to witness the cooperative spirit of the Government and people of Nevis.  He also noted that he thoroughly enjoyed the hospitality of the people and that he looks forward to a long and productive relationship with the Government of this country; and to continue to strengthen the ties that has been established.