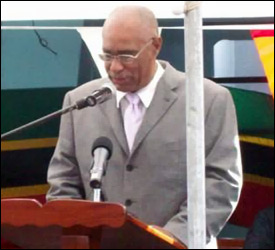 Premier of Nevis, the Honourable Joseph Parry addressed the nation on the developments in Education on Friday, August 29th; as Nevis prepares for the beginning of the new school year today, Monday September 1st, 2008.

“I must congratulate the Permanent Secretary in Education, Mr. Joseph Wiltshire, Principal Education Officer, Mrs. Jennifer Hodge her staff at the Department of Education and every head teacher for their sterling efforts of ensuring that they deliver good quality education to the children of Nevis,” articulated Hon. Joseph Parry.

The Premier announced a recorded improvement in the performance of the Primary School students in the Test of Standards and noted this as being quite significant, since the improvement had been registered for every single school on the island.  While congratulating the children and their parents, Premier Parry went on to say that he wants to encourage teachers and parents to boost the children’s confidence by praising them publicly for their good work.

Twenty ““ four subject courses were offered with passes in all of them.

Human and Social Biology was introduced at the Gingerland High School two years ago with eight students obtaining an 87.5% pass rate. This year ten students were entered with 100% passes.

In observing the CAPE results, Premier Parry congratulated Agiel Browne for achieving the singularly spectacular feat of passing all her units with all distinctions. He also gave honourable mention to Science student Florelle Hobson, who scored 6 distinctions in her two years at sixth form.