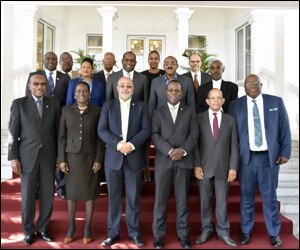 Prime Minister of St. Kitts and Nevis, Dr. the Honourable Timothy Harris, gave a passionate plea, often to rousing applause, to OECS (Organization of Eastern Caribbean States) Heads “to be wedded to efforts of regional integration in the OECS and CARICOM (Caribbean Community).

Speaking at the 62nd OECS Authority Meeting (November 18-19) at the opening ceremony held at the Fort Young Hotel in Dominica, Dr. Harris said “we need one another.”

“Today I come as a friend of the efforts of regional integration to defend those efforts at deepening and broadening efforts of integration,” he said. “We are better when we work together.”

Prime Minister Harris said that the Government and people of St. Kitts and Nevis show solidarity with the Government and people of the Commonwealth of Dominica in light of the ravages of Tropical Storm Erika earlier this year. The decision to hold the OECS Authority Meeting has as its objective the solidarity of the members of OECS with storm-ravaged Dominica where several lives were claimed, homes, crops and livestock destroyed.

Dr. Harris, who is a new Head of Government, in his first presentation to the august body as prime minister, said that he admired the “resilience of the people of Dominica and praised the Cabinet for its perseverance and “excellent leadership in times of crisis.”

He also said that he understands the concept of coming together from a political perspective to achieve the noble goal of the common good.

“Indeed in my recent political life, I would have joined others and crossed the boundaries of political tribalism to bring the best of talents in the political sphere to build and deliver a prosperity agenda for the citizens of St. Kitts and Nevis,” said Dr. Harris to his fellow Heads of State. The Dr. Harris-led Administration, the Government of National Unity, is a tripartite Government with three distinct parties: The People’s Labour Party (PLP), the People’s Action Movement (PAM) and the Concerned Citizens Movement (CCM).

“I am concerned we are better together and in our efforts at working, we will achieve more working together,” he said, adding that “the efforts at functional cooperation at the sub-regional level, for example, have brought net benefits to all of us whether it is being able to rely on the civil aviation facilities which are coordinated at the OECS level or the strides we have been able to make in the form of our education sector or the cooperation in health which has had significant savings for a health budget for those who are participating countries””or even in the element of security in which we collaborate with Barbados.”

Dr. Harris reiterated the point that functional cooperation had brought great benefits to the people of the sub-region and said there needs to be a question in terms of how further to go in “the efforts of deepening and establishing a union through the Revised Treaty of Basseterre.”

He praised late premier of St. Kitts and Nevis, Lee Moore Q.C., who he said was instrumental in drafting the First Treaty of Basseterre.

“In fact it is to pay homage to the leadership role that St. Kitts and Nevis played in that effort at sub-regional integration,” he said.

The 63rd meeting of the OECS Authority is scheduled for May 20 to 21, 2016 and the venue is to be decided between Montserrat and Anguilla.