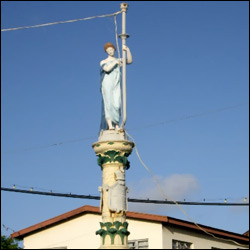 Passengers on the 90,000 tonne Queen Victoria will see a statue in her honour when they disembark from the Cunard liner named in her honour.

The Queen Victoria, which has a capacity of 2010 passengers, will dock at Port Zante on December 20th on its inaugural call to St. Kitts – Nevis during its 22-day Caribbean Holiday Cruise.

“Dedicated to the memory of Queen Victoria erected by the people of St. Kitts A.D. 1902,” is engraved on the monument erected in her memory at the round-a-bout at Baker’s Corner. Its original home was at the round-a-bout near the Cardin Home but was relocated to its present site in the late 1960’s.

On January 16th 2008, the Queen Victoria, made her maiden call to Ft. Lauderdale, Florida, just three days after embarking on her Maiden World Cruise and making an historic Royal Rendezvous in New York with both sister-ships Queen Mary 2 and QE2.

Victoria was born at Kensington Palace, London, on 24 May 1819. She was the only daughter of Edward, Duke of Kent, fourth son of George III. Her father died shortly after her birth and she became heir to the throne because the three uncles who were ahead of her in succession – George IV, Frederick Duke of York, and William IV – had no legitimate children who survived.

Warmhearted and lively, Victoria had a gift for drawing and painting; educated by a governess at home, she was a natural diarist and kept a regular journal throughout her life. On William IV’s death in 1837, she became Queen at the age of 18.

Queen Victoria is associated with Britain’s great age of industrial expansion, economic progress and, especially, empire. At her death, it was said, Britain had a worldwide empire on which the sun never set.