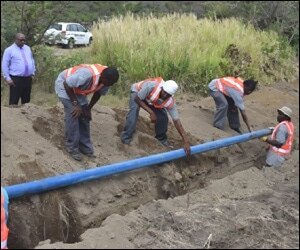 Prime Minister of St. Kitts and Nevis, Dr. the Honourable Timothy Harris, has urged residents of the Federation to be “careful with the use, and avoid the abuse of water at a time when there is a shortage.”

He emphasized this at the recent groundbreaking for the Mansion ““ Phillips ““ Molineux Water Supply Improvement Project when he outlined the importance of rectifying the situation.

“We have provided over $600,000 to the Water Department to ensure that within a matter of weeks or a few months, the water situation, as it impacts upon the people of Phillips, Molineux and Bourryeau would be significantly improved,” Prime Minister Harris said.  “It is an expenditure that the Government is prepared to make because we will never count the dollars while lives are being inconvenienced.”

T. Dennison Paul, Water Services Department (WSD) Acting Manager/Water Engineer, revealed that the situation in Mansion, Phillips, Molineux and Lodge was peculiar in that unlike the other communities in the Federation, the only water available was from surface water (river or spring) sources. He described this as having “no redundancy” and explained that this made the area more vulnerable in the sense that there was no alternative source of water during droughts, as was the case in the other communities of St. Kitts. Hence, the importance of water supply improvements to the area.

“We are now running 800 feet of four inch diameter ductile iron pipe, all the way to Phillips,” Mr. Paul said.  “When that water gets to Phillips, it would supply Phillips Village, Molineux, Bourryeau and of course Mansion.  The other aspects of this project include chlorination.  We would have to chlorinate that water supply to improve its quality to protect human health.  We will also install a generator so that in the event of electricity outage we have standby generation, so that the people in the community do not suffer.”

The WSD Water Engineer further revealed that the project includes an automatic level control system.  This he noted would cause the pump to close off once the tank at Phillips became full.

Citing St. Peter’s as an example, the Prime Minister noted that each particular water situation in other communities would be addressed.

“Those persons at Lodge, particularly those in the region above the school, must remain assured that just as we have moved here to bring relief, relief is intended to come to those people on the upper slope of Lodge; equally those in the upper St. Peter’s region,” Prime Minister Harris said.  Indeed all who reside in high elevations become vulnerable when there is a water shortage.  We want to offer our regrets for the inconvenience but to say to you and assure you that help is on its way.”

Mr. Paul detailed that another $300,000 had been provided by the Government to increase the overall supply of water.  He noted that two wells were being drilled north of the Robert L. Bradshaw (RLB) International Airport by Ocean Earth Technologies (OET) that would provide an additional one million gallons of water per day.

OET, which is based in Florida, United States, provides services in the fields of hydrogeology, marine science, geotechnical investigations and geophysical mapping.  The company’s previous association with the Federation was in 2009, when it conducted a hydro-geological survey and provided a report which gave a basis for the completion of the Water Resource Management Plan and Park Management Plan for the Royal Basseterre Valley National Park.