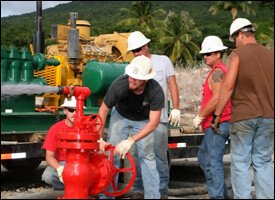 The Nevis Geothermal Project is expected to move to its second phase in the first quarter of 2009.  Word of this has come from Minister of Communication, Works, Public Utilities and Posts, the Hon. Carlisle Powell.  Mr. Powell was part of a welcoming party that engaged Saba officials in discussions with the Nevis Island Administration and a tour of the geothermal exploration sites on the island on Saturday January 24, 2009.

“The second phase would be production drilling, so you’d be seeing a different type of drill rig, and you definitely will be seeing more than just a slim hole being drilled at the three different drill sites.  It says to Nevisians that we are getting closer, that this phase of it is over [exploration phase], and we are now ready to move on to phase two.”

“Once we complete all the documentation then, it means that we are ready to move on very quickly to phase 3,  not only with the production drilling but getting the plant ready so that we can move on to that stage which would put us closer to having geothermal energy.  It also means that we are much closer to getting rid of that fuel surcharge,” he said.

Minister Powell welcomed the Saba officials who included Energy Commissioner Bruce Zager and Geologist Trudy Hall. He congratulated them on making the bold step of exploring for geothermal energy.

Commissioner Zager said the primary purpose of his visit to Nevis was not only see the sites but to see what would be in store for Saba once the geothermal process started.   Recognizing that both Saba and Nevis are small nations, he was of the view that governments should work together for the betterment of the islands and its people.

Meantime, Chief executive officer of WIP Nevis Limited, Mr. Kerry McDonald confirmed that the company’s drill team will be heading out to Saba next week to commence exploratory drilling on that island. He added that Nevis will see them replaced by the arrival of a production drill rig crew.

“They will be drilling the holes over there [Saba] in the next 60 to 90 days and they will then go on to Dominica. They will be replaced with the production drill rig crew who will be here in March/April.

He further explained that although the skills required for the production phase of the project are not available on Nevis, some 60 specialists would be arriving and would assist in training locals to work with the project.

“The employment on that 10megawatt plant will be roughly 40 jobs for locals. In addition, we will have to import about 60 specialists. The plant will be at Springhill, Nevis1,” Mr. McDonald said.