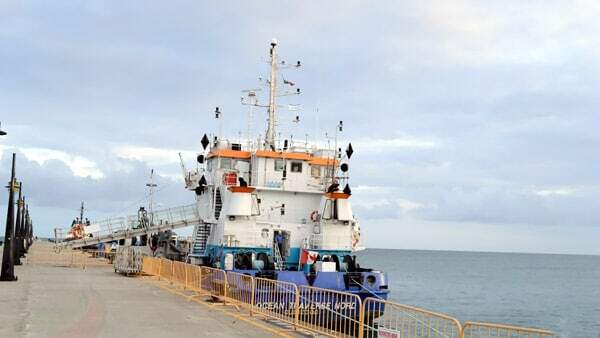 St. Christopher Air and Sea Ports Authority (SCASPA) on May 15 held a Seabed Breaking Ceremony at the Port Zante Cruise Terminal for the construction of the second cruise pier. This is in keeping with the promise of its delivery within 18 months, said Minister of Public Infrastructure, the Honourable Ian Liburd.

“The construction of the second cruise pier has now commenced and in just under 18 months your Team Unity Administration, God’s willing, we will deliver another one of its promises,” said the Minister, noting that the pier will be completed by September 2019.

“We must feel good about that. In less than 18 months, if it’s the will of God, the Canadian Commercial Corporation (CCC) would hand over to the St. Christopher Air and Sea Ports Authority (SCASPA) and by extension the Government of St. Kitts and Nevis and its people a second cruise pier, which will be 60ft wide, 670ft long, with a draft alongside, approximately 32ft,” said the minister.

Minister Liburd said that the pier will be designed to withstand a “one in hundred year’s cycle storm.” He added that it will also accommodate two of the world’s largest cruise ships, the Oasis Class ships.

The minister said that with the installment of the second cruise pier, St. Kitts and Nevis will be strategically positioned to become a marquee port capable of accommodating the growing sizes of cruise vessels being constructed today.

Minister Liburd noted that its construction will bring about a number of job opportunities for locals.He mentioned the recent job fair held by the prime subcontractor JV Driver at the Tucker Clarke Primary School.

“I am advised that over 300 persons and subcontractors signed up and are expected by next month- June; JVD and specialized subcontractors would have their full complement of workers all from our local labor pool. We must feel good about that,” he said.

Dredging equipment for the seabed arrived in early May and commenced work a few days later, said the minister.

“I was advised that 50 percent of the dredging works have already been completed with a 100 percent of the general work schedule to be completed in June while construction is expected to commence as early as next week,” he said.

Minister Liburd said that he was further advised that in June, American Bridge, which is the marine contractor, will arrive with two barges and large capacity cranes. He added that the first shipment of pipe piling would be on St. Kitts to facilitate the driving of piles. This is also scheduled to commence in June.

All works so far are on schedule, said the minister.

“We would not have been this far had it not been for the financing which was provided by our local syndicate players in the tune of US $48 million,” he said. “For that reason, I wish to recognize these players and to take this opportunity to thank them once again for demonstrating their support for this very crucial project. The St. Kitts and Nevis National Bank, the Social Security Board, the Sugar Industry Diversification Foundation of St. Kitts and Nevis, TDC Insurance Company Ltd. and TDC Financial Services Company Ltd.”

The commercial construction contract for building the second pier was signed between the St. Christopher Air and Sea Ports Authority (SCASPA) of the Government of St. Kitts and Nevis and the Canadian Commercial Corporation (CCC), a crown agent of the Government of Canada, which is the prime contractor with JV Driver (JVD), being the prime subcontractor. SCASPA’s engineer is AdeB Consultants to work alongside the Director of Public Works, Mr. Cromwell Williams. The Lender’s Engineer is EF Douglas and Associates, with Principal Consultant Errol Douglas.