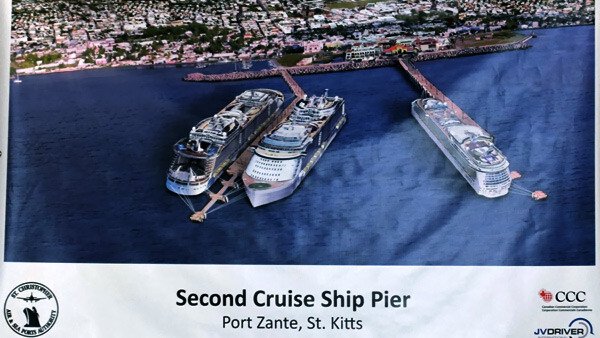 The construction of a second cruise pier at Port Zante will come at an opportune time as larger ships are being built, says Minister of Public Infrastructure, Honourable Ian Patches Liburd.

Minister Liburd noted that the Caribbean is a prime cruise destination “with more than 8.8 million passengers on-board over 147 cruise ships between 2015 and 2016.”

The minister added that even though the competition for vessel deployments of major cruise operators is immense, the Caribbean has continued to maintain its position.

The minister of public infrastructure said that the increasing trend to deploy vessels that can accommodate in excess of three thousand passengers has prompted the government and by extension the Caribbean to put infrastructure in place to accommodate larger vessels.

“We are already accommodating the largest vessels that are plying the seas today,” said Minister Liburd. “But, as new and larger vessels come online, the new, enhanced ports will capture their itinerary calls leaving the existing older ships to continue servicing the lesser equipped ports, and of course a second cruise pier will position St. Kitts – Nevis to be the recipient of those larger cruise vessels.”

Minister Liburd said that this development is about the national consideration “because when we assess the benefit of a second pier to the country as a whole and approach it as a necessary national infrastructure and not just a pier, we are aware of the impact that such a development has on the grassroots economy in particular.”

The minister said that tourism in general has a cascading effect on the economy.

“It trickles right through the economy, impacts our taxi drivers, our hair braiders, our restaurants and the list goes on,” he said. “So the economic benefit to the country verses the cons associated with an increased debt has been assessed by us as a government.”

Minister Liburd said that increased cruise ship passengers will create significant opportunities for employment and self-employment of Kittitians and Nevisians.

He noted that there will also be an “increased earning of foreign exchange and a very clear opportunity to showcase St. Kitts and Nevis for return land based visits.” He added that there will be an increased purchase of real-estate and promotion of the Citizenship by Investment Programme (CBI).

Minister Liburd said that the second cruise pier project has the full support of the Cabinet as “it will create local employment as the construction of this new pier will bring significant opportunity for local subcontractors and suppliers.”