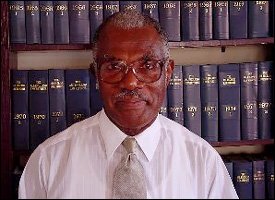 Kittitian historian and former Governor of the State of St. Kitts Nevis and Anguilla, Sir Probyn Inniss, is the keynote speaker at this year’s Requiem Mass commemorating the life of public service to the Federation by late leaders of the St. Kitts-Nevis Labour Movement.

Sir Probyn will give the feature address during the service at the St. Paul’s Anglican Church on Sunday, 31st May. In attendance will be Governor General, His Excellency Dr. Sir Cuthbert Sebastian; Prime Minister the Hon. Dr. Denzil L. Douglas, Cabinet Ministers, the Diplomatic Corps, the Executive Officers and Members of the St. Kitts-Nevis Labour Party and the St. Kitts-Nevis Trades and Labour Union, family members and a wide cross section of the local community.

The Mass, which starts at 4:00 P.M., will give thanks and praise for the service of the early pioneers of the Labour Movement including Thomas Manchester and J. Matthew Sebastian.

The Service will be conducted by Father Isaiah Phillip with Mrs. Hulda Lawrence as Organist. The First Lesson will be read by Prime Minister Douglas, the Second Lesson by Deputy Prime Minister Hon. Sam Condor and Prayers by Dr. Norgen Wilson.

Ms. Sharon Rattan will give a dramatic presentation, a duet by Mr. Dwight Huggins and Norman Williams and selections by the St. Paul’s Teen Mothers Support Group and Labour Women (St. Paul’s).

Sir Probyn is the Senior Partner in the Law Firm, Inniss and Inniss and has served in the Public Service as Permanent Secretary, Crown Counsel and Teacher.

After graduating from the University of the West Indies in 1961, he taught at the St. Kitts-Nevis Grammar School for some years. He later read Law at the Inns of Court School of Law in London and was called to the Bar at the Middle Temple. He has had a distinguished career in the public service of St. Kitts-Nevis-Anguilla culminating in his appointment as the second native Governor from 1975 to 1981.

Sir Probyn is also the author of several books.