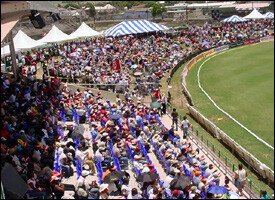 St. Kitts and Nevis is cautiously optimistic about hosting matches during the upcoming tour of the Caribbean by the Bangladesh Cricket Team.

Prime Minister Hon. Dr. Denzil L. Douglas, who was welcoming the England Team to St. Kitts Wednesday said he hopes Warner Park Cricket Stadium will be selected as one of the venues for the tour of the West Indies by the Bangladesh Team.

“I am cautiously optimistic that we will be successful in getting test matches being played here at Warner Park Cricket Stadium during the upcoming tour of the Caribbean by Bangladesh,” said Prime Minister Douglas, who is also the Minister of Sports and was at the time welcoming the England Cricket Team.

Bangladesh’s planned tour of the West Indies has been rescheduled for June and July.