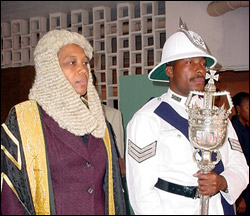 A Special Sitting of the St. Christopher and Nevis National Assembly will be held on Friday, prior to a regular  session later in the day at which three bills are to be debated.

Clerk of the lawmaking body, Mr. Jose Lloyd in a notice to Members of Parliament advised “That the meeting on Friday 18th April 2008, at 10:00 A.M. will now take the form of a Special Sitting to pay tribute to the Honourable Marcella Liburd, Speaker, who will be demitting office shortly thereafter.”

Mr. Lloyd also advised that the Special Sitting will be adjourned to a regular sitting later that same day at a time to be announced on the adjournment.

Early last month, Prime Minister Hon. Dr. Denzil L. Douglas during a sitting, informed lawmakers that his office had received advanced notice that the Speaker of the National Assembly of St Christopher (St Kitts) and Nevis, the Honourable Marcella A. Liburd intends to demit office in the near future before the end of the life of this current Parliament.

“Though obliged to accept this notice, I have received this with mixed feelings”¦mixed feelings because of the tremendous leadership that this Assembly has received as a result of the exemplary services provided by you Madam Speaker of this Honourable House and Servant of the people.”¦mixed feelings because in demitting office it provides you Honourable Madam Speaker the opportunity to serve your people and your country in a different but equally important capacity hopefully in a high office in the future,” said Dr. Douglas at the time.