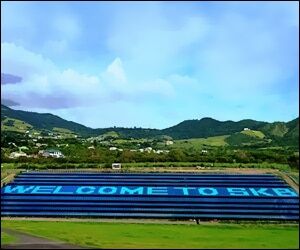 Officials from the St. Christopher Air and Sea Port Authority (SCASPA) and the St. Kitts Electricity Company (SKELEC) thanked the Government and people of Taiwan for the donation of US$600,000 to be used for upgrades at the Robert Llewellyn Bradshaw International Airport (RLB) and the final stage of the development of the solar farm on the Frigate Bay Road.

At a handing over ceremony on Thursday, December 10, Marcellus Phillip, Acting Chief Executive Officer (CEO) of SCASPA, thanked the donors and described the donation as vital.

“I would like on behalf of SCASPA, to thank deeply Taiwan for this latest contribution,” he said. “I think this is testimony to the depth of the bond and relationship between our two peoples and this certainly will go a long way in continuing the development of this bond.”

The CEO recalled the relationship between SCASPA and Taiwan, stating that it goes as far back as 2006 when a loan of EC$37.6 million was received for the renovation of the runway and the apron at RLB.

“That did not stop there. In 2011, we were the recipients of EC$806,000 donation for the purchase of a reach stacker which was badly needed at the time because our stacker was in bad condition,” he said.

He added that in 2011, SCASPA received the first donation of US$300,000 for the renovation of the arrivals lounge and stated that it was expanded and fitted with two additional booths, while the departure lounge was fitted with an additional 100 seats in 2012.

Mr. Phillip pointed out that the donation will go towards the third phase of the renovation process. This includes the removal of old tiles and replacing them with new ones, the installation of new counters, repainting, resigning and a number of other enhancements.

Cartwright Farrell, Chief Executive Officer (CEO) at SKELEC, described the partnership between Taiwan, and the electricity company as a great one. “The time we have worked with you on the solar farm has been enjoyable and fruitful,” he said.

Mr. Farrell also thanked the Government of St. Kitts and Nevis for partnering with SKELEC on the solar project and said it is going to bode well for the people of the Federation, as it shows commitment and dedication to pursuing renewable and clean energy.

The .5 megawatt solar farm which is located in the Basseterre Valley Park on the Frigate Bay Road is the second of its kind in the Federation. The first farm which is one megawatt was constructed in 2013 and is situated at RLB.