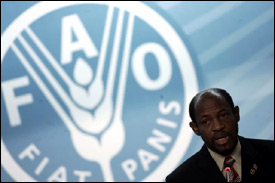 A call by St. Kitts and Nevis‘ Prime Minister Hon. Dr. Denzil L. Douglas at last month’s World Food Security Summit in Rome for the FAO to assist Member Countries with seeds, fertilizer and other inputs to assist the farmers to carry out a rapid production of agricultural products has not fallen on deaf years.

Wednesday the FAO announced the approval of a series of projects in 48 countries for a total value of US$21 million to help small farmers and vulnerable households mitigate the negative effects of rising food and input prices. The projects will provide farmers with agricultural inputs as of this month for an expected duration of one year.

“We need help and we need it immediately,” Prime Minister Douglas told the several Heads of State and Government as well as numerous Ministers of agriculture, forestry, fisheries, water, energy and environment at the Summit.

Dr. Douglas had said there was an urgent need to develop measures to ensure that the adverse effects of the higher food prices on the poor are minimized and that sustainable measures are developed and implemented to reduce poverty.

FAO said the assistance to the 48 countries will be funded by the Technical Cooperation Programme ““ i.e. FAO’s own resources ““ they are part of FAO’s Initiative on soaring food prices (ISFP).

With six countries already benefiting for a total amount of nearly US$2.8 million, FAO’s own funding under the Initiative on soaring food prices now covers 54 countries.

The immediate objective of these projects is to ensure the success of the next planting seasons and, in the longer term, demonstrate that by increasing the supply of key agricultural inputs, such as seeds and fertilizers, small farmers will be able to rapidly increase their food production.

Increased food production would help cushion small farmers, who often have to buy part of their food from markets with rising food prices and would, hopefully, lead to a surplus production that could be sold, increasing their income and facilitating the access to food of the rural and urban population.

The provision of seeds, fertilizers and other agricultural inputs to small farmers is intended to encourage donors, financial institutions and national governments to support the provision of inputs on a much larger scale, according to FAO experts who stress that their Initiative is intended to produce a salutary catalytic effect that will encourage development partners to contribute to similar projects, but on a larger scale.

According to FAO, countries most affected, especially in Africa, will need at least a total of US$1.7 billion to start reviving agricultural systems that have been neglected for several decades. And this amount is just for immediate and short term measures during 2008-2009.

The unprecedented hike in food prices, which rose 52 percent between 2007 and 2008, has had severe economic, social and political consequences in poor countries. And high prices of agricultural inputs have become a major obstacle to developing countries’ efforts to increase agricultural production.

For the period January 2007 to April 2008, fertilizer prices in particular shot up at a much faster rate than food prices.

Anticipating the widespread impact and grave nature of soaring food prices, in December 2007, FAO launched its Initiative on soaring food prices to help vulnerable countries put in place urgent measures to boost food supplies by ensuring the success of their agricultural campaigns and to provide policy support to improve access to food.