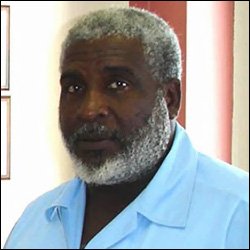 The St.Kitts Amateur Basketball Association will get the ball rolling this Tuesday February 24th 2009 when they convene the first general meeting of the year. The meeting will be held at the Foundation of National Development Conference room at 6pm. According to officials of the association letters were sent out during the latter part of last week inviting member clubs and teams to the very important general meeting. Notices have also been sent out to the various local media houses inviting all interested persons and teams to the meeting.

The main agenda item is Elections of a new executive to lead the association into the 2009 season. James “Barman” Hanley is currently at the helm . Hanley was elected in a bi-election last year after then President Glen “Ghost” Phillip abruptly resigned his post as president citing lack of commitment and support from his executive.

The last 4-5 years have been a very tumultuous time in SKABA in terms of administration. In 2006 a new President was elected in Mr. Wendell Pemberton. Pemberton’s reign was highlighted by the finals of that year which saw easily the largest crowd at a SKABA finals in years. However his presidency became better known for accusations of corruption and mismanagement of SKABA funds by certain league officials including then national team coach Glenn Phillip who criticized Pemberton”s handling of the 2006 National team which toured Jamaica. Phllip eventually succeeded Pemberton as president in 2007. Despite the association being able to procure the largest sponsorship in league history the season fell way below expectations . Phillip served just one year before resigning his post as President. This forced a bi-election which saw James “Barman” Hanley being elected as president to complete the final year of the 2 year period of Mr. Phillip.

Hanley is expected to seek a re-affirmed mandate of his presidency at Tuesday nights elections. Although Hanley will likely hold on to his position as President it is widely expected that the remaining positions on the executive will all see new faces.

“Basketball has been through quite a bit over the years and it has seen many persons come and go and through it all Barman has been the only constant,”  said the Manager of one of the SKABA member clubs. “SKABA needs to find persons that are as committed as Barman and they have to look within as persons who have been sought from the outside have all failed. SKABA has to mold and work with those who have been there throughout the years and who have showed a commitment even without holding executive positions,” the Club Manager Continued.

Other key matters on the agenda for the Tuesday 24th meeting are the Year in Review and Financial Report.

The meeting will also serve to officially discuss and finalize the start date of the 2009 league.