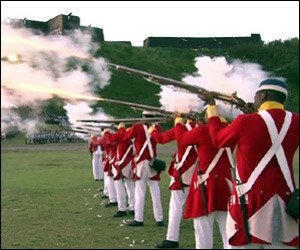 Prime Minister Dr. the Honourable Timothy Harris commended the Brimstone Hill Fortress National Park Society (BHFNPS) and its founding members, for having the vision and foresight of safeguarding the heritage of St. Kitts and Nevis.

The praise came at the recent BHFNPS’s Human Chain and Sunset Ceremony and Beating the Retreat to mark the 50th Anniversary of the Founding of the Society.  He informed that the Society was incorporated under the Company’s Act in the same month that it was founded, being April 1965.

“Today we are in a way celebrating that vision 50 years on.” the Leader of the Federation stated.  “Today we acknowledge the pioneering role of such persons as Sir Geoffrey Boon, Conell Howard and Lloyd Matheson in the restoration of this fortress.  During those years and still today, the primary objective of restoring and stabilizing this magnificent edifice remains as focused as it ever was.”

Several outreach activities of the society were outlined including the staging of the Emancipation Concert, the activities undertaken during History and Heritage Month as well as the partnering with other non government organizations (NGOs) in raising the consciousness of youth.  Gratitude was further expressed for the economic contribution of Brimstone Hill.

“I must express the profound gratitude of the government of national unity and all the people of the Federation for their past endeavors, especially as our Gibraltar of the West Indies continues to be a magnet for locals and visitor,” Prime Minister Harris stated. “As we work to bring more visitors, the Park will always be featured prominently as a main attraction, so the economic value can’t be ignored.”

Special attractions of the ceremony were the human chain comprised of students and young people running from the base of Brimstone Hill to the citadel and the St. Kitts-Nevis Defence Force’s Beating the Retreat.  Initially used as a signal to retreat during battle, this tradition later was used as a means of alerting soldiers, who were passing their free time in the villages, that it was time to return to barracks for the night.  There was also a re-enactment by the Defence Force of soldiers outfitted in the Fourth West India Regiment uniforms.  Members of the Carolina Corps of the West India Regiment that fought in the War for American Independence were sent to the West Indies and joined local slaves to became part of the Fourth West India Regiment that served in St. Kitts.