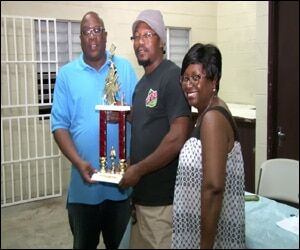 The 20th annual non-stop Dr. Timothy Harris sponsored Constituency #7 Domino League came to a close on Tuesday, December 22, 2015, in Molineux at the Edgar Gilbert Pavilion with a prize giving ceremony that saw top spot going to Lodge, who has won the competition for the seventeenth time.

With its genesis in Mansion Village in 1996, with a total of 7 teams, the league has grown exponentially in two decades, with 14 teams in this year’s competition, two of which were new. The league has achieved its objectives of not only sharing the art of domino playing but providing an opportunity for community building in bringing persons together. The competition has also provided an avenue for young persons to be positively inclined and engaged.

Speaking at the ceremony, Prime Minister of St. Kitts and Nevis and signature sponsor of the league, Dr. the Honourable Timothy Harris, said he was proud that his constituents were able to start and maintain the league over so many years. He commended the organizers of the league saying, “We are very proud of this constituency league. It is the only one of its kind in the Federation that has been going strong for 20 years.”

Prime Minister Harris said the success of the league over such a period of time is indicative of the talented persons in his constituency.

“It speaks to our ability to organize as a constituency and our ability to persevere and it means when put to the test we come out in flying colours and that is a good sign,” Dr. Harris said.

“We are delighted that so many teams started this year. This is a good way to go as far as the development of domino is concerned,” he said, in congratulating all the teams in the league.

In the category called the Best of the Rest (that is all the teams that didn’t make in the final four) Saddlers emerged as the winner; Unstoppable took second place; Parsons garnered third place; and Inner City Youths reaped fourth place.

The Best of The Rest were awarded with cases of drinks from the Carib Brewery: Saddlers received 10 cases; Unstoppable was presented with 8 cases; Parsons won 6 cases; and Inner City Youths secured 4 cases. All other participating teams received 2 cases each.

Assistant Coordinator of the Constituency 7 Domino League, Mr. Winston Morris, said that he was extremely pleased with the league.

“The league went really, really well. We feel so good about that. One of the new teams was led by a lady. She did a great job. We look forward to the league next year,” Mr. Morris said.