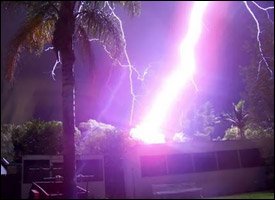 Lightning, strong winds and heavy rains are being blamed for power outages experienced on Sunday.

“This was followed by a lighting strike shortly after 12 noon that caused the system to become unstable resulting in the automatic protection for the Aggreko containers activating, causing them to shut down. This caused a cascading effect resulting in the loss of electricity island-wide,” said Williams.

He said the Electricity Department deeply regrets the inconvenience that the interruption in supply of electricity has caused.