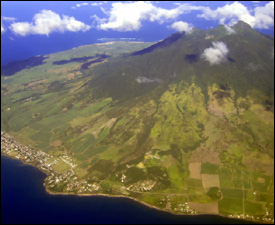 St. Kitts’ Mount Liamuiga (aka Mt. Misery) has been included in a hot list of volcanoes to confront by foot, bicycle, car or even snowboard.

In an article entitled: “Hiking into Hell: Volcano trekking Spots,” Shira Levine writes on Fox News Travel section, that at nearly 4,000 feet the steep incline to reach Mount Liamuiga’s crater is one of the most challenging of the 18 volcanoes dotting the Caribbean.

The circular hike up inactive volcano takes about 2.5 to 3 hours each way, and the journey passes through the rain forest where banyan, viper, fern and bamboo trees thicken a canopy of trees reaching 100 feet.

While more difficult with each ascent, there are always roots and rocks to grab onto for pulling up. Hikers enter the cloud forest at roughly 2,500 feet to orchids and moss covering dwarf trees, and an ethereal mist adds ambiance and awkwardly slippery moisture. (Warning: At rainforest level, squishy mangos pillaged by French-imported monkeys slip up distracted hikers too.)

Inside the crater a plummeting panorama of lush greenery and a gleaming lake tempt only the highest skilled hikers to dare climb down. The island’s famed guide/herbalist, Oneil Mulraine, 63, of Oneil Tours (oneilmulraine@hotmail.com), climbs the volcano in a record 45 minutes each way ““ at the hiker’s pace he charges $90/person.

Mt. Liamuiga is a stratovolcano located in the North West Range of St. Kitts rising to 3,792 feet above sea level. It has had four Holocene eruptions and two unconfirmed historic eruptions in 1692 and 1843. The dates for the prehistoric eruptions range from 2320 BC to 150 AD.

Three of these eruptions were Plinian eruptions, which is a large explosive eruption that sends a massive column of tephra and gas nearly 7 miles high, into the stratosphere.

Plinian eruptions are named for Pliny the Younger who carefully recorded the catastrophic eruption of Vesuvius in 79 A.D. An eruption which claimed the lives of about 2,000 people in Pompei and Herculaneum, including his father, Pliny the Elder.

Once atop this majestic peak, the panoramic views are spectacular.

On a clear day you can see Saba and St. Eustatius to the northeast and to the north, St. Maarten, St. Barts and Anguilla.

To reach the peak and peer into the splendour of its crater is breathtaking. The climb is a challenging one and requires a somewhat experienced hiker instead of the Sunday afternoon quarterback.

Some of the slopes and pathways are very steep and treacherous, so wear good hiking shoes and lightweight clothing. A guide is a must for this trip and there are several good tour companies that offer this spectacular hike.

Other volcanoes making the list are, Mount St. Helens in Washington, USA; Eyjafjallajokull in Iceland and Cerro Negro in Nicaragua.