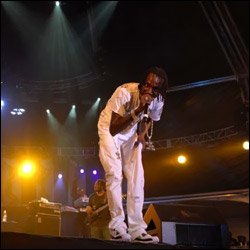 Excitement for the 15th Annual St. Kitts Music Festival is building in the twin island Federation and further afield, and the Minister of Tourism, Honourable Richard Skerritt has stressed that the entertainment extravaganza “is more relevant today as it has ever been.”

“Music Festival has to be relevant in the context of the economic activity that it helps to generate from car rentals, to restaurants, to hotels, to entertainers locally and otherwise, and vendors who benefit from the visitors who come here, the artistes themselves and so on,” said Minister Skerritt, who has ministerial responsibility for the June 23 to 25 spectacle.

While the direct economic benefits are obvious, due to the hundreds of expatriates and neighbouring residents that visit for the Festival, Minister Skerritt stressed that the indirect benefits are just as impactful.

“Every time an individual tweets or does any other communication socially or otherwise, about the Music Festival, they are actually promoting the destination of St. Kitts and Nevis and that’s how we have targeted it,” he noted, citing the tremendous buzz Ali Campbell’s UB40 appearance on the Festival on June 23rd has generated in the United Kingdom. “There are so many different ways to get your name out there but one of them is through event marketing. The dollar value on that is hard to quantify but it’s significant.”

The Tourism Minister congratulated Festival Chairman Faron Lawrence and his committee for the creative thought process that goes into producing a memorable three-day event on a reduced budget. He also saluted the invaluable service provided by scores of volunteers as well as the sponsors for their continued support of the brand.