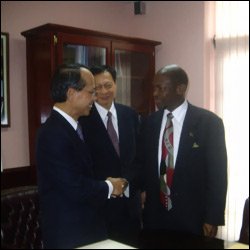 “When I was in St. Kitts last week to attend the national independence celebration, I felt the vitality, optimism and diligence of the people. It is a country with limited potentials,” Hou is quoted in the Taipei Times, which carried a report on celebrations in Taiwan to mark the 25th anniversary of St. Kitts and Nevis of Independence.

St. Kitts and Nevis Attorney General and Minister of Justice and Legal Affairs, Hon. Dennis Merchant was in the Taiwanese capital to participate in the celebrations.

Among the guests were Taiwan Minister of Foreign Affairs His Excellency Francisco Ou; Ambassador of the Republic of Burkina Faso, His Excellency Jacques Sawadogo, who is also Dean of the Diplomatic Corps and other heads of diplomatic missions.

Twenty-five years after gaining independence, the Federation of St Christopher and Nevis remains the smallest country in the western hemisphere, but has grown in stature with a 97.8 percent literacy rate and free education for children until the secondary level, said St. Kitts and Nevis Charge d’ Affaires, Ms. Jasmine Huggins.

“Twenty-five years ago, Taiwan was the first country to establish diplomatic relations with the Federation of St Christopher and Nevis and over the period, the Republic of China on Taiwan has proven a friend to our country,” she said.