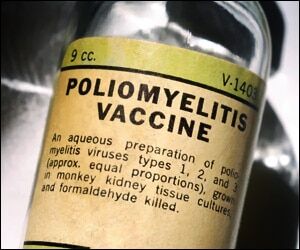 Infants in St. Kitts and Nevis now receive the first dose of the polio vaccine in the injectable form, in the health centers in the Federation.

This was revealed by a press release from the Community Based Health Services of the Ministry of Health that informed that effective December 15, 2015, infants two months of age are being given this form of the polio vaccine.

The additional four doses will be given via drops or orally as is customarily done.

“Thereafter, oral vaccine will be administered at 4 months and 6 months followed by two boosters to complete the recommended schedule,” the press release said.

“Under this plan to achieve a polio-free world, they recommend that the use of oral poliovirus vaccine (OPV) must eventually be stopped worldwide and recommend that all countries introduce at least one dose of IPV [Injectable Polio Vaccine] into their routine immunization schedule by the end of 2015.  At the World Health Assembly in May 2015, Ministers of Health accepted the Resolution regarding the poliovirus eradication. They gave their full commitment to the polio eradication strategies, including the introduction of the injectable polio vaccine,” the release said.

The Ministry of Health release also stated that research evidence has shown that giving the vaccine via injection provides even greater protection against the polio virus, which has the scientific name Poliomyelitis.

It described polio as highly infectious and “a virus which invades the cells of the nervous system. The major effect is permanent paralysis. Polio is spread through person-to-person contact with the body fluids of an affected person. It is very contagious with widespread community spread occurring in a short time. Most infected persons (72%) have no symptoms. However, one in 200 infections leads to permanent paralysis and even death.”

The Ministry of Health assures that there have been no cases of polio for more than 30 years and that the injectable and oral doses of the polio vaccine as well as the other vaccines that are administered are safe and effective.  Additionally, vaccines will continue to be given free of cost.

“The vaccine programme of St. Kitts and Nevis is one of the most successful in the world because of the widespread public confidence and support. The Ministries of Health solicit the public’s continued participation in the quest to ensure that the Federation has maximum protection against vaccine-preventable diseases,” the press release said.

Further information can be obtained by contacting the nearest health centre or private practitioner.