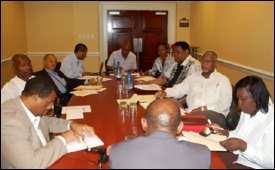 Developing a strategy to deal with the present global financial challenges was discussed Sunday between St. Kitts and Nevis Prime Minister and Minister of Foreign Hon. Dr. Denzil L. Douglas and overseas and locally-based ambassadors and head of mission.

It was also the first meeting Prime Minister Douglas was holding with the ambassadors and diplomats since assuming the portfolio of the Ministry of Foreign Affairs. It afforded the ambassadors the opportunity to brief Dr. Douglas on current initiatives and to hear from him on several issues which will assist them in representing the interests of the Federation of St. Kitts and Nevis.

“We thought that it was important to bring you home and for you to interact with the staff of the Ministry of Foreign Affairs,” said Prime Minister Douglas in brief opening remarks during the meeting at the St. Kitts Marriott Resort and Royal Beach Casino.

“With the changing global situation there is a need to adopt and develop a particular strategy and pursue that strategy with relevant action in our overseas missions as we are doing in the domestic situation at the government level,” said Prime Minister Douglas Dr. Douglas, who pointed out that the domestic environment was likely to impact the functioning of the overseas missions over the next several months.

The local diplomats are expected to meet with relevant persons in the several ministries to get vital information before their return to the respective capitals.