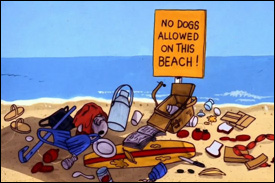 A much anticipated and critical underwater component will be featured in this year’s Annual National Beach Clean Up which will take place  on September 29.

Graeme Browne, Geographical Information Systems (GIS) and Conservation Officer, at the Department of Physical Planning in the Ministry of Sustainable Development, will be supervising the underwater clean up at South Friars Bay.  He told the St. Kitts and Nevis Information Service that a team of at least 10 certified divers, including himself, will be removing debris from the reef in the mentioned area.

Conservation Officer Browne took the opportunity to thank Lieutenant Lyn Wilkin and the other staff of the St. Kitts-Nevis Defence Force Coast Guard who will be assisting directly with the clean up as well as safety for divers.  He further noted that several students of the Clarence Fitzroy Bryant (CFB) College will be taking part in the underwater clean up.

It is expected that these volunteers will essentially find similar garbage and debris in the water to what is found on the beaches.  These should include glass, broken bottles, plastic bags and plastic bottles.  Mr. Browne explained that most of the garbage washes from the beaches and the ghauts into the sea but also includes that dumped into the sea by persons on boats.

“I would like to encourage persons sailing the seas not to dispose their garbage in the water, bearing in mind that it can end up along any coastline.”  Mr. Browne emphasized.  “The reef along South Friars Bay, in particular, provides the best snorkeling in St. Kitts because it is a living reef.  It is a nursery for lobsters and fish, and the first line of protection for the coast.  When garbage gets trapped in it, not only is it unsightly but the reef is damaged and all the mentioned benefits are lost.  It is important to enable the reef to do its natural job.”

Back on land, beaches around St. Kitts will be cleaned chiefly by high school students involved in geography and related subject areas, supervised by the Department of Physical Planning and Environment.  Last year volunteers in St. Kitts removed almost 2,000 pounds of trash which was sorted and the information relayed back to Ocean Conservancy.  Reports and statistics compiled by this agency are useful to students and researchers.

Mr. Edmeade said that each year, prior to the National Beach Clean Up his department does an outreach activity with students in St. Kitts.  He further outlined that this year, over a two-week period which started Wednesday, September 21, all seven of the high schools on the island were visited by himself and Conservation Officer Andy Blanchette.  They addressed groups of 30 students about the Beach Clean Up and care of the environment in general.