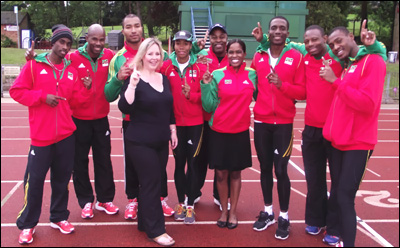 In just a matter of hours athletes from the Federation of St. Kitts and Nevis and around the world will be part of the 2012 opening ceremony of the London Olympic Games.

St. Kitts and Nevis is among some 23 Caribbean countries and Latin American nations to send athletes to the 2012 Olympics.

Starting from Hampton Court Palace, Olympic Rowing gold medallist Matthew Pinsent will carry the Flame on to the Royal rowbarge, the Gloriana, named by Her Majesty as part of her Diamond Jubilee celebrations.

The rowbarge will be rowed down the Thames to Tower Bridge by 16 oarsmen and women including Olympic Rowers James Cracknell and Jonny Searle.

Once on board, Pinsent will light a ceremonial cauldron, which will be used to light the Torches of seven young Torchbearers, in turn, who will carry the Flame as it travels down the river.

One of the Torchbearers aboard will be Amber Charles, 22, from Newham, who played a key role in London’s bid to host the 2012 Olympic and Paralympic Games seven years ago, presenting London’s proposal to stage the Games to members of the IOC at Lausanne in 2004.

As the last Torchbearer on the Thames, Amber will carry the Flame to City Hall. The Flame will then remain out of public view until it appears at the Opening Ceremony.

Over the past 70 days, more than 13 million people have lined the streets of the UK to show their support for the Torch Relay. LOCOG Chair Seb Coe said: “˜Thank you to each and every person for giving the Olympic Flame such a magnificent welcome and celebrating the best of the UK with us. Together we have given the London 2012 Games the best possible start.’

The Flame will arrive at the Olympic Stadium this evening for the Opening Ceremony, where the Olympic Cauldron will be lit and stay alight until it is extinguished on the final day of the Games.

St. Kitts and Nevis’ Prime Minister the Rt. Hon. Dr. Denzil L. Douglas has been invited to the Official Opening and is among 100 Heads of State and Government in London.