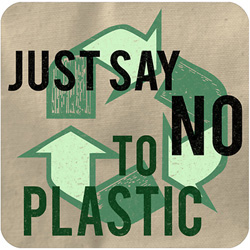 Just Say No To Plastic!

Plastic bottles were found to be the chief culprit of improperly disposed items at this year’s National Beach Clean Up which took place the last day of September.

This was according to Derionne Edmeade, Communications Officer at the Department of Physical Planning in the Ministry of Sustainable Development, who revealed that from one beach alone, specifically Conaree Beach West, a total of 706 plastic bottles were collected, compared to 162 glass bottles.  He outlined that the garbage that finds its way onto the Conaree Beach was washed down from the ghaut or left behind by visitors to the beach.  He revealed that in all areas that were cleaned the findings were similar.  These were North Friar’s, South Friar’s, North Frigate and Irish Town Bays as well as Keys and Cockleshell Beaches.

“We need to think more environmentally friendly when it comes to the disposal of our garbage,” Mr. Edmeade stated.  “Disposing our waste in ghauts, is not acceptable because it ends up in places like our beaches.  We should also remember that plastic material, in particular, is not biodegradable, so it does not go back to the earth for a very long time.  Our beaches, in particular, are not only for our personal enjoyment, but they are a means of income through tourism, as well.”

According to Ocean Conservancy, it takes 450 years for a plastic drink bottle to decompose or break down.  Ocean Conservancy is the organization which conceived and founded International Coastal Clean Up Day some 25 years ago. As such, the Federation’s Beach Clean Up Day is held in solidarity with some 152 countries and locations worldwide.

Local participants included students from the seven high schools in St. Kitts and the Clarence Fitzroy Bryant College.  Mr. Edmeade also took the opportunity to thank the volunteers from the various Government Ministries and Departments such as Health, Statistics and Environment.  The Solid Waste Management Corporation was also singled out for its contribution, as well as Christophe Harbour Development Company, which sponsored the t-shirts and allowed workers to attend.

The students themselves were very enthusiastic about the day’s activity, though disappointed by human behavior.  One young lady of the Verchilds’ High School, who combed North Friars Bay made a heartfelt plea.

“When you are coming to the beach take a plastic bag or something, so you don’t litter the beach,” she emphasized, noting that both locals and tourists enjoy our beaches.

“I like it, the fact that we’re cleaning up,” she stressed.  “We’re helping the environment but it’s very depressing knowing that it’s human hands that put them [garbage] there and I’m out in the hot sun cleaning their mess.”

The data collected from the categorized garbage collected from the Beach Clean Up will be submitted to Ocean Conservancy for analysis and will be accessible to students, researchers or any interested party.  For further information contact the Department of Physical Planning at 465-2277.