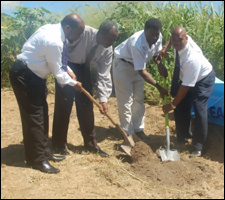 Turning of the sod to mark the construction of a headquarters of the St. Kitts Teachers Union is a milestone that illustrates the level of unity in the organisation.

So says St. Kitts and Nevis Prime Minister Hon. Dr. Denzil L. Douglas, whose administration has delivered on its promise to allocate land for the teachers’ headquarters.

Delivering remarks at the ground breaking ceremony, Prime Minister Douglas congratulated the members and executive of the St. Kitts Teachers’ Union on behalf of the Government and people of the twin-island Federation and hailed the announcement by the union to establish a Teachers Credit Union and mobilise retired reachers.

Dr. Douglas, a former teacher said members of the union must be very excited and proud of this milestone.

“The construction of your headquarters is an important step that illustrates the level of unity in the organization. This is good; because through this kind of solidarity, you can make the significant changes that you seek in your profession. We know that teachers perform one of the most important duties and roles that impact on an individual’s educational development, as well as the long-term impact on the nation,” said Prime Minister Douglas.

He commended the St. Kitts Teachers’ Union for the hosting an exceptional week of activities that has helped to further the cause of the organization and promote understanding and stimulate greater support from among the public.

“This I believe that you seek to do in your effort to make a significant difference in the lives of our nation’s children. Such is the responsibility that you take for yourselves, as teachers, in a challenging environment. The fact is that the reshaping of our youth and our society is one that calls for real collective and supportive action from every stakeholder,” Prime Minister Douglas told the President Mr. Ron Collins, Executive Officers and members at the ceremony.

“We all want our young people to have the necessary academic qualifications, but more that, we want them to have the confidence to make their mark in society,” said Dr. Douglas, who added that stakeholders want students to excel in every sphere of endeavour, to be highly motivated to be creative and to be positive thinkers.

“The Union represents, therefore, a vehicle for those in the profession to dialogue on a variety of issues, and to facilitate solutions that are of great benefit to all concerned. This is a responsibility that the Union must not take lightly, but must work to be leader in the field of education,” he said.

Prime Minister Douglas called on the union membership to keep in focus the continued improvement in the profession, in order to have greater positive impact on the nation’s students.

“I wish the St. Kitts Teachers’ Association ever success, and I look forward to great achievements in your progressive Union,” said Dr. Douglas who hailed the announcement by the union to establish a Teachers Credit Union and the mobilisation of teachers who are in retirement.

“There is so much that can be learnt and receive from these two activities that have been identified I give you my personal support and that of the Government and as we move forward in making the society a progressive one,” said Prime Minister Douglas.