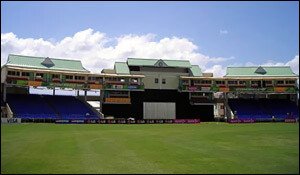 In keeping with its vision and objectives  to propel the twin-island Federation of St. Kitts and Nevis into hosting more international sports, the cabinet has endorsed a bid to host the ICC Cricket Championship in 2010.

Prime Minister and Minister of Sports, Hon. Dr. Denzil L. Douglas is on record as stating that the recent redevelopment of Warner Park will bring substantial economic value if a programme is developed strategically and implemented with excellence.

Delivering on an election promise to transform Warner Park into a venue for regional and international sporting events, government with the assistance of the Republic of China on Taiwan financed the re-development programme and so Warner Park became the 150th test venue signaling the beginning of a new chapter in the Federation’s sporting development and in sports tourism.

England will start their 2009 tour of the Caribbean with two three-day matches at Warner Park.

The first game will be a three-day practice match against a St. Kitts XI followed by a three-day first-class fixture against West Indies “A.”