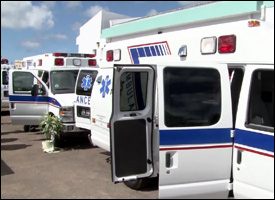 At a ceremony on Wednesday (November 23), Taiwan’s Resident Ambassador His Excellency Miguel Li-Jey Tsao reminded that a “healthy nation is a wealthy nation” and expressed delight that his Government was able to donate two of the new ambulances to be used by the Emergency Medical Services (EMS). The third vehicle was purchased by local Government.

“Thank you for having my Government onboard,” he stated, adding that health services are among the top investments a country can make for the betterment of its citizens and society in general. The “J.N.F. (Joseph N. France) General Hospital has grown in leaps and bounds throughout the years and the sterling service of all the doctors and nurses have improved and evolved.”

Ambassador Tsao noted that these developments are due mainly to the leadership provided by the Minister of Health Honourable Marcella Liburd as well as the Prime Minister the Right Honourable Dr. Denzil Douglas, who also serves as the Caribbean Community’s (CARICOM) lead Head responsible for Health.

In response, Minister Liburd thanked Taiwan for its longstanding bond of strong friendship.

“Over the years, the Ministry of Health has benefitted immensely from the technical cooperation of your Government, whether it be training of health care professionals, donations of equipment or through the financing of specific projects,” she remarked. “The addition of these two new ambulances to the Ministry’s EMS will enable us to strengthen the important service of transporting patients to and transferring patients between institutions.”

“It is timely, as we are fast approaching our festive season and during this period the EMS are often inundated with calls for assistance. The new ambulances will therefore significantly compliment our fleet.”

The emergency medical service will celebrate 12 years of operation on December 24, 2011. Figures cited by the Ministry of Health’s Permanent Secretary Andrew Skerritt reveal that just under 9,000 people have been assisted by the EMS over the past five years. Last year’s figures totaled 1,864 persons.

Prime Minister Douglas highlighted the global financial challenges that continue to negatively impact much of the developed world including the United States of America and Europe and noted that the spill off effects are being felt in the Caribbean Region.

He explained that several emergency medical programmes have had to suffer in these countries and stressed that his Government was committed to strengthening the local EMS where possible. The Right Honourable Prime Minister added that the improvement in medical care and service will greatly aid the expansion of the economy to include medical tourism which is being pursued by local authorities.