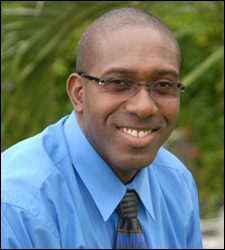 The St. Kitts and Nevis Chamber of Industry and Commerce says all is not well with the private sector as local businesses continue to be affected by the continuing global economic and financial crisis.

Chamber President Mr. David Lake speaking at the 30th Annual Private Sector Gala noted his report comes against the backdrop of a global economic decline and its attendant adverse effects that have impacted business and Government alike.

“Indeed, it has been a stressful job in these few short months. Indeed we all feel a sense of unease when we continue to hear news from around the world of mega economies and sovereignties once thought to be solid as rocks, shaken to the core by uncertain and unstable economic footing,” he said pointing to a World Bank January 2012 publication, Global Economic Prospects – Uncertainties and Vulnerabilities,” which stated: “The world economy has entered a dangerous period. Some of the financial turmoil in Europe has spread to developing and other high income countries, which until now have been unaffected. In this context, prospects are very uncertain.’

He told businesses leaders and guests that St. Kitts and Nevis have all been witnesses to the right-hooks, left-crosses, and upper-cuts suffered by the local economy at the hands of an unrelenting global downturn.

“Our economy has suffered for a long time now and has resulted in a very high debt to GDP ratio. Given these odds, the Government had little choice but to approach the International Monetary Fund for assistance. On July 29th 2011 the Fund’s Executive Board approved the Standby Arrangement, called the SBA, amounting to some EC$84 million. Through the implementation of a suite of fiscal incentives, the Government has been able to meet most of the quantitative performance criteria set by the IMF at the end of December 2011,” said Mr. Lake, adding:

“In their most recent review, which covered the period January to March 2012, the IMF has advised that at the end of March 2012, the fiscal target was met by a comfortable margin and the structural reforms have progressed as planned.”

Congratulating the Government on its dedication in continuing to follow through with the actions agreed with the Fund, under the SBA, the Chamber President admitted that “all is well with the private sector.”

“Despite the successes to date of Government’s debt restructuring programme, the confidence of many local investors has been shaken. Under these circumstances, many of us have had to rethink our strategies and undergo some form of restructuring to our businesses in an effort to avoid closing our doors,” Mr. Lake said.